Giannis Antetokounmpo, Jrue Holiday and Khris Middleton of the Bucks combine for 88 points to outlast the Suns 123-119 in Game 5. 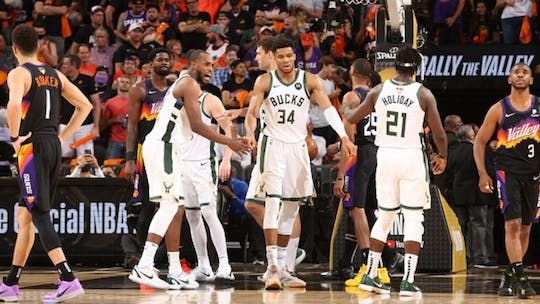 Giannis Antetokounmpo, Jrue Holiday, and Khris Middleton are the fifth trio in Finals history to record 25 points apiece on 50% shooting in the same game.

Giannis Antetokounmpo, Jrue Holiday and Khris Middleton were unstoppable in Game 5 of the NBA Finals.

Scoring a combined 88 points in the Bucks’ 123-119 victory over the Suns, Milwaukee’s Big 3 became just the fifth trio in NBA Finals history to each score 25 points on 50% shooting in a single game. They are the first to do so since James Worthy (33 points), Kareem Abdul-Jabbar (36 points) and Magic Johnson (26 points) in 1985.

Giannis Antetokounmpo, Jrue Holiday and Khris Middleton are the 5th trio in NBA Finals history to each record 25 points on 50% shooting in a game. They are the first to do this since James Worthy, Kareem Abdul-Jabbar and Magic Johnson in 1985. pic.twitter.com/vkUbKQxkOd

Their collective excellence lifted the Bucks within one victory of their first NBA championship in 50 years.

It was a crushing loss for the Suns and star guard Devin Booker, who dropped 40 points to join Rick Barry as the only other player in NBA history to record at least four games of 40+ points in his first career postseason.

Booker and Giannis are now the first pair of players in NBA history to record multiple games of 40+ points in The Finals.

Devin Booker and Giannis Antetokounmpo are the first pair of players in NBA history to each score 40+ points twice in one NBA Finals.

Additionally, Giannis (32 points, six assists) and Middleton (29 points, five assists) joined elite company with LeBron James and Dwyane Wade as the only pair of teammates to each have 500 points and 100 assists in a single postseason.