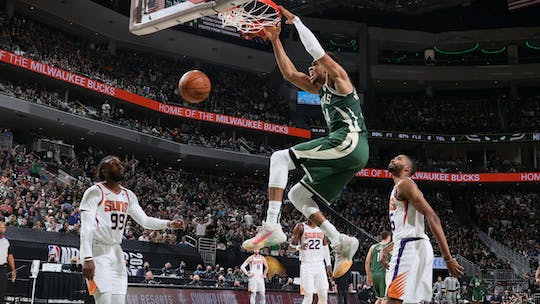 What went down in Game 3? Devin Booker went down with a severe case of homesickness and in the process took down his entire team with him.

While Book was spectacular and dangerously close to being legendary in Games 1 and 2, he wasn’t as spectacular nor as dangerous playing in Milwaukee in Game 3. He shot particularly badly in the first quarter (1-for-7) and was never able to turn it around.

The Milwaukee Bucks pulled away with a big lead, forcing Booker to sit the entire fourth quarter. He finished with only 10 points on 3-of-14 shooting from the field, hitting just one of his seven 3-point attempts.

When Booker shoots like this, the Phoenix Suns have absolutely no chance of winning. Add that to the fact that Giannis Antetokounmpo is doing the exact opposite.

Giannis again put his team on his shoulders and replicated his Game 2 performance with one that’s equally remarkable. Giannis and crew attacked and attacked until what was left of the Suns’ defensive wall in the paint was powder.

If the Bucks wish to further extend the series, that’s the formula they can work with: a bad game by Booker, an awesome game by Giannis, dominate inside. But judging by the efficiency of the Suns’ coaching staff led by Monty Williams, they’re already cooking up counterattacks for Game 4 as you read this.

Plus, it’s tough to really bet on Booker going on a shooting slump at the biggest stage of his young career. This sets us up for a Game 4 that guarantees to bring everyone’s A-game.

There was a frantic point in the third quarter when it looked like Cameron Johnson was about to take over and single-handedly annihilate the entire Milwaukee.

He put PJ Tucker in a nasty highlight, but that was just two of the 14 points he contributed in 30 minutes of action. It clearly wasn’t enough.

The legit big-time baller of Game 3 is, of course, Giannis Antetokounmpo, who dominated with 41 points and 13 rebounds. Giannis became just the second player in NBA history to score 40 and grab 10 rebounds in two straight Finals games. The other player? Shaquille O’Neal. Those two-handed dunks and mean mugs aren’t the only things they have in common.

But while the Shaq comparisons are unavoidable, Giannis is putting his own twist by doing something Shaq couldn’t: knocking down 13 of his 17 free throw attempts. That’s a huge difference-maker.

MJ once scored 40 points four straight times in the 1993 NBA finals against the Suns. Giannis is halfway there, but the two-time MVP said he’d rather focus on taking it one win at a time.

If, for some reason, you were asleep during the third quarter of Game 3 and then suddenly woken up by loud screams, sirens, and other disturbing noises, it came from this: