NBA legend Gary Payton says notable defensive players like Patrick Beverley and Marcus Smart “have that dog in them.” 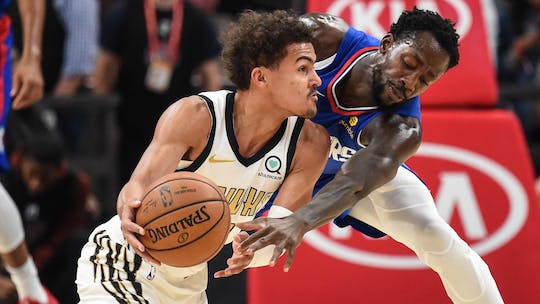 Devin Booker, a human fireball that can ignite at any given time, begged for the ball at the 3-point line. On him was Pat Beverley, who was, give or take, four inches shorter.

As soon as the ball touched Book’s hands, Beverley latched on to him, in a way that was neither clingy nor affectionate. It was more suffocating. Beverley planted his right forearm on Booker’s hips, using it as a sort of fastening device to secure him in place.

Book waited until there were about three seconds left on the shot clock to make his move. He swung his off arm to break free from Pat Bev’s clutches and made a run for the basket.

Beverley, with both eyes laser-focused on the ball, went for it. One violent swipe with his left hand sent the ball flying, forcing Booker to go up for it in the air. One second left. Booker ended up at the 3-point line, back where he started, and quickly went into his shooting motion to beat the shot clock.

Before Booker could even get up for what was potentially a fireball of a 3, Beverley took another violent swipe with his left, enough to disrupt Book’s pre-launch. Book came down with the ball with no time left on the shot clock. Book knew what had just happened: another lockdown play by Pat Bev, a human clamp.

To make sure that the moment stuck with Book, Pat Bev gave him a little bump to the ribs, a vicious snarl, and a couple of words. If you had been a fan of the game since the ‘90s, this defensive gem of a moment would look familiar: it’s that Glove mentality.

NBA legend Gary Payton was baptized The Glove because of this tenacious, relentless, and savage brand of defense that he brought to the league. It’s not enough that he made the best scorers forget that they were the best scorers, he’d rub it in.

Pat Bev has that same energy. He’s in that same The Glove mentality club as Marcus Smart, who’s had his run-ins with Kevin Durant in their recent first-round matchup.

Smart, despite standing only 6”4’, has built a reputation of being your favorite scorer’s worst nightmare.

“Smart is doing it the best way because he picks his spots and he does it on a consistent basis,” Payton said in a recent meet and greet event* organized by the NBA for its affiliate partners.

Both Smart and Beverley have been named to the NBA All-Defensive First Team and most often are called up to handcuff the opposing team’s best scorer—the Devin Bookers and the Kevin Durants of the NBA. More than that though, Payton said these two players got his respect because of their defensive toughness.

“In defense, they are up there because they have that dog in them. They try to play you 94 feet and get into you,” he said.

Payton has had his share of difficult assignments in his stint as The Glove—the John Stocktons and the Michael Jordans of the NBA. He’s the stuff scoring nightmares are made of.

With Payton’s seal of approval, The Glove mentality is now alive in Marcus Smart and Pat Beverley, giving the league’s top scorers something to think about at night.


*During the 2021 NBA Playoffs, NBA Philippines is hosting local partners to a series of meet and greet sessions with NBA legends. After conducting fireside chats with Hall of Famers Chris Bosh and Gary Payton, NBA Philippines will invite more NBA players including 7-time NBA Champion Robert Horry in July and host partners and advertisers,both existing and new, to exclusive experiences in the future.

--
Double Data is back on Prepaid Home WiFi! Enjoy 140GB double data for all sites with FamLoad 999, best value for 30 days! Exclusive offer on the GigaLife app. Download here.
Read Next
News