Grizzlies say Jaren Jackson Jr. due to return by end of April

The Grizzlies forward has been sidelined since tearing his left meniscus last summer. 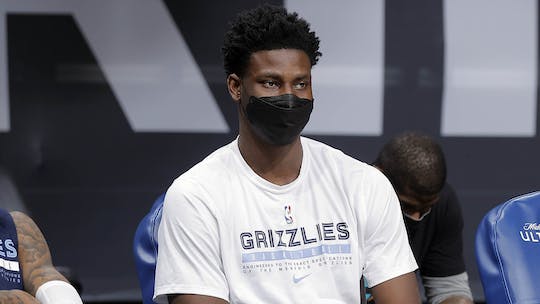 MEMPHIS, Tenn. (AP) — The Memphis Grizzlies expect forward Jaren Jackson Jr. back in the lineup by the end of April, nearly nine months after he hurt his left knee in the NBA bubble.

Jackson tore the meniscus in his left knee in his third game in the NBA bubble last summer, and both he and the Grizzlies chose to do a full repair rather than try to trim the meniscus for a faster return. Kleiman said that was done for the long-term of the fourth overall pick in the 2018 draft who won’t turn 22 until September.

Kleiman said some people can return in eight months, though others need nine.

Jackson also was inactive for nine games before the coronavirus pandemic shut down the NBA last March. The 6-foot-11, 242-pound Jackson, a member of the NBA’s All-Rookie team for 2018-19, has averaged 15.5 points and 4.6 rebounds per game over his first two seasons.

The Grizzlies, winners of three straight, went into Friday’s game at Utah ninth in the Western Conference, a half-game behind San Antonio for eighth.
Read Next
News