Growing animosity between Mavs and Suns

The Mavericks-Suns series is getting more heated each game, reminiscent of their playoff battles back in the early 2000s. 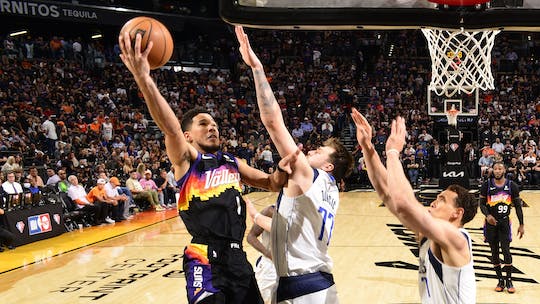 The Phoenix Suns are now one win away from entering the 2022 Western Conference Finals after dominating Game 5 against the Dallas Mavericks.

In a nutshell, the Suns were able to play their game and impose their will, especially in the decisive third quarter. They outscored their opponents 33-14 as the Mavericks struggled to score. It was a 110-80 rout as the series goes back to Dallas.

More than the in-game adjustments, the tweaks in each team’s game plans, and the stellar play from both sides, one thing that can’t be denied is the growing animosity between the Suns and the Mavs.

It’s safe to say that they don’t like each other at all.

When Devin Booker went down in the middle of Game 5, he stayed on the floor a little longer. When he got up, he turned to the crowd and said he was doing the “The Luka Special.” It was a direct jab at the Dallas star.

There was also the other viral instance of Booker trying to snatch the ball away from Doncic during a play stoppage and the latter throwing vulgar words at the Phoenix guard.

Big men Bismack Biyombo and Marquese Chriss also got into it during the tail end of the game. Both were ejected and the commotion followed in the tunnel as security had to step in to defuse the situation.

After the game, Doncic said aloud, “Everybody acts tough when they’re up!” when the Mavs were headed back to the locker room.

The hostility and resentment are oozing from the players. This is competitive playoff basketball at its peak. Both teams don’t want anything to do with the other and are tired of each other’s faces. This is going to be a playoff series that can leave a lasting impact on both franchises.

In fact, this brewing bitterness between Dallas and Phoenix is reminiscent of their playoff battles back in the early 2000s. In 2005, the top-seed Suns beat the four-seed Mavericks in six games to advance to the Western Conference Finals. The parallels can’t be overstated as the 2022 Suns are the No. 1 seed while Luka and his team are fourth in the West.

The 2005 Suns were also victorious in Game 5 at home and went on to take Game 6 on the road. Steve Nash laid it all out for his squad, pouring in 39 points in the clincher.  A year later, the Mavericks got their revenge as it was Dirk Nowitzki’s turn to advance. As much as there was mutual respect between the two clubs, the competition was fierce and unforgiving. Nash and Dirk were friends but you couldn’t really tell from the way they were ready to rip each other apart.

Seventeen years later, the rivalry between the Suns and the Mavericks is being renewed. And this time, there is absolutely no love lost between Book and Luka. They’re not friends. There’s mutual respect for sure, but you won’t see them going out to dinner any time soon.

Granted that any budding rivalry takes time, but you could tell this early that this iteration of the Suns and Mavs are ready to take their strife to another level.

Let’s hope this series goes to a Game 7. And then who knows, maybe they’ll meet again the following year and a few more times in the next decade. No matter what happens in this series, this is going to be a matchup worth watching in the years to come.