Payday came on Monday for a handful of young NBA standouts. 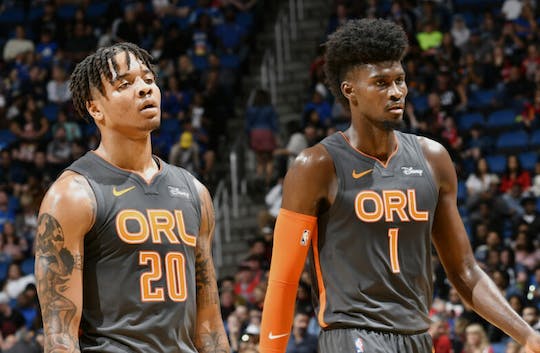 Orlando signed Jonathan Isaac and Markelle Fultz to extensions, while San Antonio did the same with Derrick White and Toronto with OG Anunoby.

All four could have been restricted free agents next summer, and their teams had until Monday to get new deals done with those players. The deals all begin with the 2021-22 season.

Isaac ($80 million), White and Anunoby ($72 million) each received four-year extensions. Fultz got a three-year extension worth $50 million. The terms of the deals for Issac, Anunoby and Fultz, each of them first reported by ESPN, were confirmed to The Associated Press by people with knowledge of the negotiations. The people spoke to the AP on condition of anonymity because terms of the deals were not publicly announced.

ESPN reported White’s deal to be worth $73 million.

“We are thrilled to keep both Markelle and Jonathan in a Magic uniform,” Magic President of Basketball Operations Jeff Weltman said. “They both have a very bright future and they mean a lot to our organization, both on and off the court.”

Isaac is not expected to play this season.

Anunoby averaged career-bests of 10.6 points and 5.3 rebounds while becoming a full-time starter for the Raptors last season.

“OG is the epitome of the skilled, powerful, determined player we want in our organization long-term. Remember, he doesn’t shoot to miss,” Raptors general manager Bobby Webster said. “We’re really pleased that OG will be with us for seasons to come.”

White averaged 11.3 points for the Spurs last season. He was one of the guards selected to USA Basketball’s 12-player roster for the Basketball World Cup in China in 2019.

Many top-tier free agents who could have hit the market next summer have also signed new deals in recent days, including two-time reigning NBA MVP Giannis Antetokounmpo with Milwaukee, LeBron James and Anthony Davis with the defending NBA champion Los Angeles Lakers, Rudy Gobert with Utah and Paul George with the Los Angeles Clippers.

Other signees of big extensions that start next season included Bam Adebayo with Miami, Jayson Tatum with Boston, Donovan Mitchell with Utah and De’Aaron Fox with Sacramento