Has Blake Griffin run out of hops?

NBA.com Philippines writer Miguel Flores looks back on Blake Griffin's journey as he begins the next chapter of his career as a Brooklyn Net. He hasn't been banned from dunking like Lew Alcindor in the ‘60s. He probably could still dunk outside of games or if the perfect conditions were met during a game. It's just that he hasn't dunked since 2019.

For a lot of NBA players, being unable to dunk isn't a big deal. Dunks are just two points -- worth just as much as a layup, one less than a 3-pointer. But for Blake Griffin, dunking made him special. From 2010 to 2018, dunks, more specifically lobs, made the Los Angeles Clippers special.

Blake Griffin ended Pau Gasol’s prime. Gasol still made All-Star appearances later on in his career, but on April 4, 2012, Griffin made Gasol look washed. Twice. Gasol is the best Spanish basketball player ever, but he was but a human trampoline for Griffin on that day.

This was probably the second most violent posterization in NBA history. From Gasol not knowing who to blame for what happened to Mike Tirico's stunned silence – Griffin unlocked a new level of devastation. The Lakers ended up winning the game. The Clippers started a new era in Los Angeles.

The Lakers -- more than the Dodgers, Angels, Sparks or Rams – are LA's team. But for a brief moment from 2011 to 2017, the Clippers were Showtime. It all revolved around Blake Griffin. Vince Carter has the GOAT NBA mixtape, but Blake Griffin’s highlights give Air Canada a run for his money. Griffin was so nasty that his highlights were named after the dudes he dunked on. You already saw the two Gasols. But he first unleashed the Gallinari and the Mozgov in the same game. Then, the Perkins.

The Clippers had terrible luck with their high lottery picks, before picking Griffin first in the 2009 Draft. In the 2011 offseason, the Clippers landed Chris Paul, at the time the best point guard in the league. Around the same time Griffin was building his poster résumé, DeAndre Jordan was coming into his own.

From 2012 to 2013, the Clippers acquired pieces that were crucial in turning Los Angeles into Lob City, signing JJ Redick, Jamal Crawford and Matt Barnes then trading for head coach Doc Rivers. Between Griffin, Paul, Jordan and Crawford, there were always highlights to be had. The excitement these  Clippers brought every game is best memorialized in listening to long-time Clippers play-by-play man Ralph Lawler. Clippers games weren't complete without at least one “Oh me, oh my", “Bingo" or “The lob, the jam!”

The Lob City experience was visceral – from the sight of bodies on the floor after a poster to the sound of Clippers and Doc Rivers chirping at referees to Steve Ballmer summoning all his neck veins screaming from the sidelines. The Clippers were the NBA’s rockstars with Griffin and Jordan playing the hits, and Paul bringing the level-headed leadership.

Soon after acquiring Paul, the Clippers started piling up wins. In 2012, they made their first playoff appearance since 2006. Los Angeles made the postseason again in 2013 as the fourth seed, but were eliminated by Zach Randolph, Marc Gasol and the Memphis Grizzlies, forcing the Clippers to make some changes.

Doc Rivers took over the following season, leading the Clippers to a third seed in the 2014 playoffs and setting the franchise record for wins at 57. Their first round series against the Golden State Warriors went the distance. The Clippers prevailed, setting up the first of two major turning points in the Lob City era, their second round series against the Oklahoma City Thunder.

Both teams split the first four games, setting up a pivotal Game 5. The Clippers controlled much of the game, leading by seven with around two minutes to go. But an unexpected collapse of Chris Paul left the Clippers with nothing as the Thunder rolled into the Western Conference Finals.

The cracks began to show in the 2014-15 season. Blake Griffin had expressed disdain for the Lob City nickname as it seemed limiting to his growing game. He was limited to just 67 games this season, but did begin flashing his expanded jump shot range and playmaking. He finished in the Top 5 in MVP voting after towing the Clippers to the fourth seed in the West.

Paul played his biggest games and had his biggest moment in their first round matchup against the defending champion Spurs. The Clippers were again looking like championship contenders heading into their second round series versus the Houston Rockets. But this was the last time Lob City was a contender.

With a chance to win the series at home, the Clippers cruised to a 19-point lead through three quarters in Game 6, printed to head to the next round. But Houston and Josh Smith had other plans. With a chance for the franchise’s first Western Conference Finals appearance, the Clippers suffered one of the worst playoffs losses of the decade. They never got up for Game 7. Lob City was in shambles.

When Lob City crumbled, all the fun from watching them was suddenly sapped. A combination of quad injuries and disciplinary suspensions sidelined Griffin for much of the 2015-16 season. Add a hand injury that shelved Paul, the Clippers didn't have enough to get through the Portland Trail Blazers in the first round. The knee problems then began to resurface for Griffin in the following season. He had minor operations done midseason, but was never fully healthy. The Clippers again faced a first-round exit, this time via the Utah Jazz.

Blake Griffin is the face of the Clippers. He's their most iconic player, even after their recent haul of new stars. Signing Griffin to a max extension in 2017 made sense for the Clippers. But in that season, the Clippers traded him to the Detroit Pistons. Paul, Jordan, Redick and Crawford all left in free agency.

Griffin ended up having one more stellar season in Detroit, making an All-Star appearance and Third Team All-NBA in 2019. But even then, Griffin was never the same. He still had enough tools to be productive even with diminished athleticism, but his knees didn't cooperate. 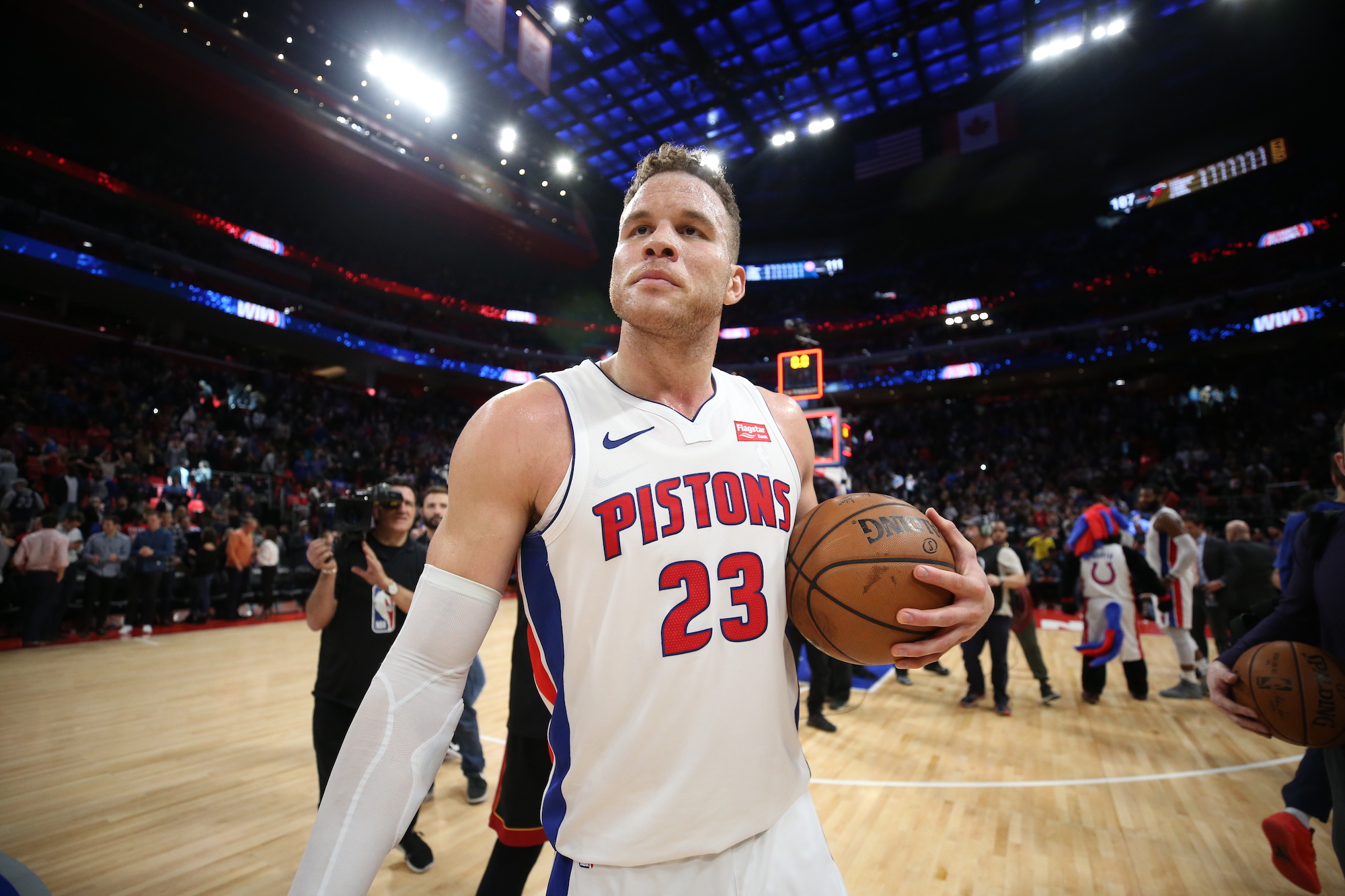 It's fascinating watching superstars at the end of their prime. The lucky ones go out like Kobe or Dirk -- beloved by a franchise and a fanbase with tribute videos at every away game. There’s guys like Shaq and Vince Carter who were bent on squeezing every ounce of basketball they had in them, even if it meant hopping around the league.

The end of Blake Griffin's prime was inevitable and abrupt. Two seasons of constant knee problems left Griffin a shell of himself in his last games with Detroit. The greats could often muster a small part of their prime in spurts when they needed to. There was none of that for Griffin. He meandered into post-ups, settled and missed jumpers, and seemed lost on a rebuilding Pistons team.

When Griffin opted out of the last year-and-a-half of his lucrative deal, he was giving in to the end. We’re never getting back one of the most fun players to watch in basketball.

Now in Brooklyn, he joins former Lob City partner DeAndre Jordan in trying to help the Nets' Big 3 of Kevin Durant, Kyrie Irving, and James Harden win a championship. Jordan, himself also aged way out of his prime, has turned into a valued locker room presence.

Maybe Griffin also becomes the veteran every star seeks in building a contender. Maybe Griffin finds his role with the Nets and wins his first career title. Maybe, if the perfect situation arises, Griffin catches one more lob and gives us one more poster – an excuse to lament the vestiges of a revolutionary team.

Whatever happens to Griffin, hopefully he stays in the league a bit longer. Hopefully, he dunks again.