Heat guard Kyle Lowry (hamstring) out for Game 5 vs. Sixers

Miami's starting point guard will not play in the pivotal Game 5 on Tuesday night. 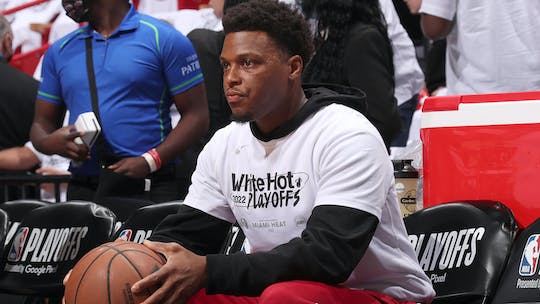 Miami Heat point guard Kyle Lowry will not play in Game 5 against the Philadelphia 76ers on Tuesday because of a hamstring injury.

The veteran guard reinjured his left hamstring in the first half of Game 4 on Sunday, which the Heat lost 116-108. He had missed four straight playoff games before Game 3 of the series vs. Philadelphia with a strained left hamstring. The series is tied 2-2.

He missed four games earlier in the postseason because of the hamstring problem, then aggravated it in Miami’s Game 4 loss on Sunday. Lowry continued playing through much of that game, limping at times and finishing 3 for 10 from the floor, 0 for 6 on 3-pointers in Miami’s 116-108 loss.

“I know how competitive Kyle is and how much he wants to be out there, particularly at this point in his career,” Heat coach Erik Spoelstra said Tuesday. “This is what he’s playing for, these moments. … I do feel for him.”

Game 6 is Thursday in Philadelphia. Game 7, if necessary, would be Sunday in Miami, which is also the first possible start date of the Eastern Conference finals.

Lowry got treatment Monday and was hopeful of getting onto the court for Game 5. It didn’t take the Heat long to determine that wouldn’t be possible.

Miami enters Tuesday with a 16-7 record in games that Lowry has missed this season.

“I know how much he wants to be out there,” Heat guard Tyler Herro said, adding that Lowry’s leadership will be missed. “He’s obviously not out there, so we need another voice out on the court that can help us get into our spots.”

With him out, the Heat must figure out whether to return to their same rotation from earlier in the playoffs when they were without him or if it’s time to put Duncan Robinson in the lineup. Robinson has been out of the rotation in this series.