Heat have backs against the wall

The Heat suffered a bad loss in Game 5 and are on the brink of elimination. How can they bounce back? 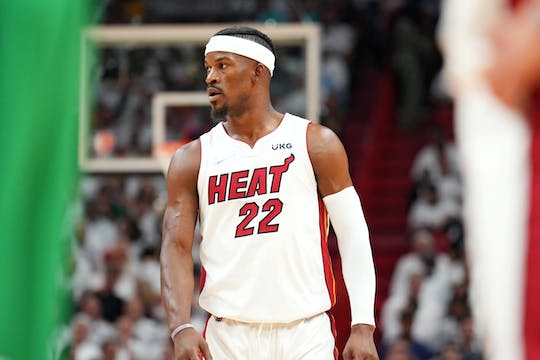 It doesn’t get any simpler than this: one team shoots 46.5 percent from the field and the other just 31.9, one team makes 10-of-33 from beyond the arc and the other only makes 7-of-45. With a final score of 93-80 in favor of the Boston Celtics, it’s quite obvious who shot what.

The Miami Heat took a hard blow as their shots failed to fall. Jimmy Butler, Kyle Lowry, Max Strus, and Victor Oladipo only made a combined 5-of-40 (12.5 percent) from the field. To say the Heat were having an off day is an understatement. While this is normal for any team, they just don’t have the luxury to have bad games this deep into the playoffs.

The Celtics are leading 3-2 in the Eastern Conference Finals and are one win away from advancing to the biggest stage of the NBA. Because of one off night, the Heat are now in a do-or-die situation to keep their season alive. Bouncing back isn’t an option anymore – it’s a must.

Tyler Herro was sidelined in Game 5 after sustaining a groin injury that typically takes 2-4 weeks to heal. Duncan Robinson is back in the rotation to fill in his absence, but he isn’t delivering the numbers he’s expected to make.

Oladipo is also having a frustrating stretch after performing so well in Game 4 where he had 23 points, four assists, and six steals. Consistency seems to be a problem for him and the majority of Miami. Their unpredictability worked well for a stretch, but now that things are getting more heated, they are slowly cracking under pressure.

But then again, it was an off night. If their shots fell in, then this game would have been a completely different story.

The Heat are more than capable of bouncing back as they did in Game 3. It’s now a matter of getting into a rhythm early on and disrupting Boston’s offense. They need to keep locking down on Jayson Tatum the way they did earlier in the series.

Robinson and Strus both need to make their shots in the absence of Herro. Butler needs to play at an elite level to give the Heat a chance at a seat in the NBA Finals. In short, Miami needs to collectively execute better to keep its hopes alive.