How CP3 dominated the Mavs in Game 2

Chris Paul put on another masterful performance to help the Suns take a 2-0 lead over the Mavs. 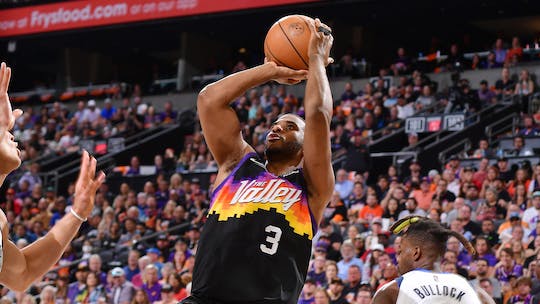 Chris Paul delivered another masterful performance in the fourth quarter to propel the Phoenix Suns to a victory. It’s something we’re supposed to be used to by now. We’ve seen it countless times before. We saw it recently in the first round of the playoffs against the New Orleans Pelicans.

We know Paul can get it going when his team needs him the most. And yet, there’s always a special delight witnessing the Point God imposing his will in the clutch. It’s like when your favorite band plays the hits or when a chef whips up your go-to meal.

In Game 2 against the Dallas Mavericks, Paul had 28 points, 14 of which came in the final frame. The game was headed for a tight last 12 minutes before Paul took matters into his own hands. He hunted for the matchups he liked, surveyed the floor with ease, and got to his spots. The midrange was falling and so were the driving lanes inside.

“Especially in the fourth quarter, I was a spectator. I got to watch it from the bench,” Devin Booker said postgame. “It impresses us every time we see it but it doesn’t surprise us. I mean, it’s just the will to win. He sees a matchup he likes. You could hear their bench yelling, ‘send him left!’ You can try whatever you want to do but he has a rebuttal move for you every time. Not only can he score, [but] he can make a play for somebody else if you leave your man - so tough matchup.”

Booker had quite a game himself with 30 points. Paul laid the foundation in the Suns’ huge fourth quarter and Booker put the icing on the cake. Booker drilled timely 3-pointers down the stretch to put away the Mavericks.

“We’ve been a great fourth quarter team this whole season and we pride ourselves in, not valuing that quarter more than the other ones, but locking in and understanding it’s time to win,” Booker said as the Suns have been the deadliest team in crunch time situations. “We’ve done a good job of having a lead at the end of the third quarter and finishing teams off this year and tonight was another example of it.”

Paul is going to be 37 years old this weekend. He is in Year 17. He’s had a lot of mileage under his legs but he’s shown no signs of slowing down. His longevity has given him wisdom on the court with how he outwits the defense and similarly off the court as he takes care of his body.

“When he comes back to start the fourth, for whatever reason he’s fresh,” said head coach Monty Williams. “Sometimes I play him too much in the first and the third that I get concerned if I should start him in the fourth. But I love to sit here and tell you I knew why or how he does it. I just think, I don’t know if our guys expect it but I know they’re grateful for it. You could kinda see it when he starts going, everybody else just follows suit.

“He's just a fantastic basketball player, and the thing I love about Chris is he just cares.”

Phoenix shot a mind-boggling 84.2 percent in the fourth quarter which happened to be the second-best field goal percentage in the final frame over the last 25 seasons (via ESPN Stats and Info). By the end of the game, the Suns had a 64.5 shooting clip, a franchise record for field goal percentage in the postseason. The Suns were extremely efficient and Paul is in the vanguard of their attack.

“What’s amazing is it feels like for the first two quarters he’s like relaxed, he’s chilling,” Jae Crowder said of Paul. ”He’s not too aggressive, he’s just reading the game. And then he has a switch where he just turns it on. He sees how they’re defending him. He sees what’s on the backside. He sees the different coverages that they’re throwing at him and he just attacks it.”

The Suns constantly put Luka Doncic in a lot of action. Doncic may score in bunches, but the Suns seem determined to make him work on the other end. When Paul had the ball down the stretch, he was exploiting the switching defense deployed by the Mavericks to his favor. He would ask for a screen, size up the defender after a switch, and either get his own shot or pass it to an open teammate.

"Just the way he manipulates it, honestly,” Booker said about what he appreciates the most out of Paul’s game. “He's just in control at all times, he's two, three steps ahead of whatever the other team is doing, and just the leadership that can never go unnoticed when you're talking about this man. Just the way he holds people accountable. The will to win. The list keeps going on and on. That’s why he has the nickname he has.”

We’re so used to seeing CP3 in the clutch. And we’ll continue to see him work in the waning moments of a game. The feeling of expecting something familiar doesn’t take away the thrill of the experience. That’s how Chris Paul is whenever he’s in his element in the fourth quarter.