Refining LaMelo Ball's decision-making without compromising his creative playmaking will be key to Hornets' success as 2021-22 rolls on. 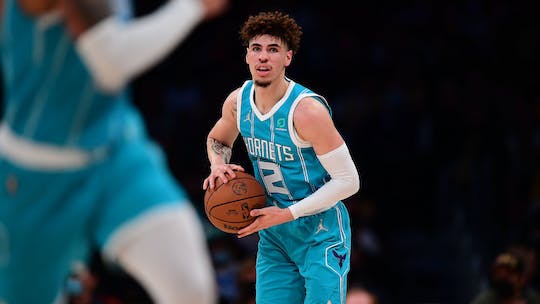 The night ended with Ball hearing near gasps while furiously trying to lead the Charlotte Hornets into a late-game comeback against the Los Angeles Lakers. That did not end exactly the way the Hornets envisioned with the Lakers escaping with a 126-123 overtime win on Monday at Staples Center.

Yet, the game featured what they had envisioned in Ball taking another step in his growth by posting his second career triple-double in points (25), rebounds (15) and assists (11) in a career-high 42 minutes.

“He took a step forward tonight as a professional,” Hornets coach James Borrego said. “He got us in good stuff, especially down the stretch. I was really proud of him.”

After all, Borrego had outlined following the Hornets’ loss to the LA Clippers on Sunday and 90 minutes before Monday’s game how he wanted more from Ball. It has only been five months since Ball won last season’s Kia Rookie of the Year Award after becoming the 12th rookie in the NBA history to average at least 15 points, five rebounds, five assists and a steal.

Yet, Borrego has looked for signs that Ball can become known for more than just his highlight-reel passes, his eclectic fashion choices or his father’s outspoken marketing efforts.

After feeling encouraged with Ball bulking up his listed 6-foot-7, 180-pound frame this offseason, Borrego has called on Ball to develop another winning habit. The challenge: can Ball refine his decision making without compromising his creative playmaking?

“That’s obviously the balance with me,” Borrego said. “The homeruns allow that momentum to continue. But he can’t always seek out the home run or the home-run play. We have to be more consistent. That’s the message for him right now: Be solid, be stable.”

Ball did not initially seem receptive to that message.

As the Hornets allowed the LA Clippers to score 22 unanswered fourth-quarter points on Sunday, Ball did not record a single basket or assist during that stretch. Borrego also played Ball fewer than six minutes in the fourth quarter because of foul trouble and late-game decision making.

“I feel like I’ve got to be in there longer for the fourth quarter,” Ball said. “You feel me? I feel like I came in a little late in the game.”

Ball did not have such worries during Monday’s game against the Lakers. He played the final 10 minutes of the fourth quarter and all of overtime. During that stretch, Ball finished with a combined nine points, six rebounds and two assists.

Ball did not speak with reporters afterwards. But those around him noticed the quick transformation.

“It’s crazy how he’s impacting the game and flying around and stuff like that,” Hornets guard Terry Rozier said. “He’s going to be special. Once he keeps learning the game and things like that, the sky’s the limit for him.”

What does the next step for Ball entail?

“I’m not Houdini,” Rozier joked. “It’s going to be something good, though.”

After all, the Hornets selected Ball at No. 3 in the 2020 NBA Draft for a reason. They became intrigued with Ball’s playmaking after thriving professionally in Australia. They became convinced Ball was more gym rat than reality TV star. They became encouraged how Bell led the Hornets to a Play-In Tournament appearance after missing 21 games because of a broken right wrist.

Yet, the Hornets entered the 2020-21 season wondering how Ball would put together an impressive encore.

Will that actually play out? Who knows.

The Hornets started with a 5-2 record, only to lose five consecutive games. Ball has overseen one of the league’s best offenses, as well as the league’s worst defense this season.

On one hand, Charlotte’s Gordon Hayward likened Ball to Lakers guard Russell Westbrook for both his rebounding tenacity and energy. On the other hand, Borrego gushed about how Kyle Lowry developed steady decision making through 16 NBA seasons before pivoting into how Ball still needs to build consistent habits on both ends of the court.

“What makes him special is his feel and his instinct on both sides of the ball,” Borrego said of Ball. “Sometimes he’s going to go find a steal defensively. Sometimes it’s also going to cost us a wide-open 3 if he doesn’t get that man. So I got to walk that balance.”

As the Hornets experienced against the Lakers, however, they saw glimpses that Ball seems capable of walking that balance. Perhaps next time, Ball’s growth coincides with a needed win.

The views on this page do not necessarily reflect the views of the NBA, its clubs or Turner Broadcasting

The 22-year-old guard did not return after suffering the injury in the 1st half of Friday's game against Milwaukee.