LaMelo Ball is out indefinitely due to a fractured wrist. What happens to the Hornets' playoff chances and the Rookie of the Year race? 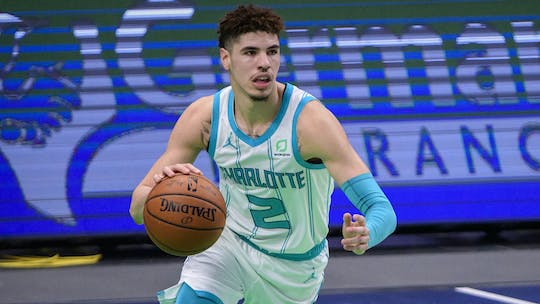 The Charlotte Hornets star will be reevaluated in 4 weeks after undergoing successful surgery to address a fracture in his right wrist.
In a season with major injuries to stars like LeBron James, Anthony Davis, Kevin Durant, Klay Thompson, Kemba Walker, and Ja Morant, none might be more disappointing than the injury sustained by LaMelo Ball of the Charlotte Hornets.

The rookie standout came crashing down after a layup attempt versus the LA Clippers, and the succeeding diagnosis -- a fractured right wrist -- has cut short his brilliant season that came with extremely high expectations.

It’s disheartening to lose a player like Ball. He is one of the most exciting youngsters who know how to mix substance with style, which made the Hornets look cool, and more importantly, a legitimate playoff contender. The encouraging thought is that Ball is only 19 years old and should be able to make a full recovery. He underwent successful surgery and will be reevaluated in four weeks.

Let’s examine how Ball’s absence will impact the Hornets and the entire league.

The Hornets have been one of the surprise teams in the NBA, and it’s no coincidence that it happened in the same season that Ball joined the team. Sure, you can point to Gordon Hayward and his mature, steady game as a big factor. Even Terry Rozier in his second year with Charlotte has elevated his game to become a very productive starting player.

But make no mistake: Ball is the game-changer.

His raw averages of 15.9 points, 5.9 rebounds, and 6.1 assists are impressive, and his advanced statistics -- 110.4 offensive rating and 31.9 assist percentage -- indicate that he’s a player wise beyond his age.

But more than the numbers, what Ball has done in his first few months with the Hornets is immeasurable. After all, when was the last time that people queued up to buy Charlotte Hornets jerseys? Has a Hornet ever been on the box cover of NBA cards and packs? Could Hornets legend Kemba Walker ever help Charlotte fetch a high price on NBA Topshot?

None of those would happen without Ball’s presence.

Despite his injury, the Hornets still have a chance to make the playoffs. They are currently sitting in 6th place in the East with a 21-21 record, including a three-game losing streak that was only snapped earlier today when they won against the San Antonio Spurs. They are half a game behind the 5th seed, but they are only two games ahead of the 10th seed.

What’s working in the Hornets’ favor is that several teams currently below them (Indiana, Chicago, and Toronto) have had difficulties in finding ways to win consistently. Of those three squads, the Pacers probably have the best chance of leapfrogging the Hornets in the standings as they become more and more comfortable with inserting Caris LeVert in the lineup. The Raptors have been plagued with injuries and COVID scares, while the Bulls are still a season away from learning how to close out games.

Even without Ball, the Hornets should be able to stay in the hunt for at least the Play-In Tournament. For a franchise that has struggled to find success in the postseason, advancing to the next stage will still be considered an achievement.

It would have been more exciting if Ball were part of the big dance, though.

Rookie of the Year race

Since the start of this current NBA season, only two rookies have won Rookie of the Month: Ball in the East and Sacramento Kings guard Tyrese Haliburton in the West.

There’s no doubt that in the Eastern Conference, Ball has been the most outstanding rookie. The closest to him in terms of numbers would be Patrick Williams of Chicago and Shake Milton of the Philadelphia 76ers. But their pedestrian averages pale in comparison to Ball’s, which is why he has never been challenged since tipoff last December.

The New York Knicks’ rookie Immanuel Quickley has also had a fine season, but he has been battling for minutes with Derrick Rose and Elfrid Payton. Plus, majority of their production runs through Julius Randle, leaving a lower usage rate for Quickley compared to his rookie batchmates.

In the West, there are more potential rivals including Haliburton and the No. 1 pick Anthony Edwards. There was a period when Haliburton was quietly neck and neck with Ball in the ROY race, particularly when the Kings were making a push up the standings. Haliburton was impressing everyone with his mature game and stellar shooting (2.1 triples per game and 41 percent shooting from the field). However, a wrist and leg injury sidelined him heading into the All-Star break, which, coincidentally, is the time when Ball started to bust loose.

Edwards is an interesting rival to Ball because unlike Haliburton, who started out the gate strong, Edwards is exhibiting a strong finishing kick. In seven games this March, Edwards has averaged 26.1 points on 3.1 3-points made, along with 6.0 rebounds, 2.9 assists, and 1.6 steals. He has put himself on the map with some jaw-dropping dunks, particularly his dunk-of-the-year hammer on the Toronto Raptors’ Yuta Watanabe.

With Ball sidelined, can Haliburton or Edwards make a last gasp run for the award? To answer this, we’ll have to look at the past. Ball has played in 57 percent of the team’s games or 41-of-72 total played in this shortened season.

That might not seem like a lot of games, but there have been other rookies who played around the same percentage of games in their initial NBA campaigns and won. A quick scan reveals that Patrick Ewing, the 1986 Rookie of the Year, only played 50 games out of 82 (61%). However, the counterpoint to that is the rookie season of Joel Embiid in 2017 when he started out in incredible fashion, only to suffer through a meniscus tear. As a result, he only played 31 games, which was equivalent to 37 percent of the 81 total games that season. Milwaukee Bucks’ Malcolm Brogdon eventually won the award.

With all these said, Ball is still the frontrunner for the ROY award, and his numbers and impact on his team cannot be understated. But there is still a window for Haliburton and Edwards to stake their claim at the award. It’s up to them to take advantage of the opportunity.