How the Nuggets can recover from early-season woes

With injuries plaguing their stars, the Nuggets have struggled to string together some wins. What should the team do to get over the hump? 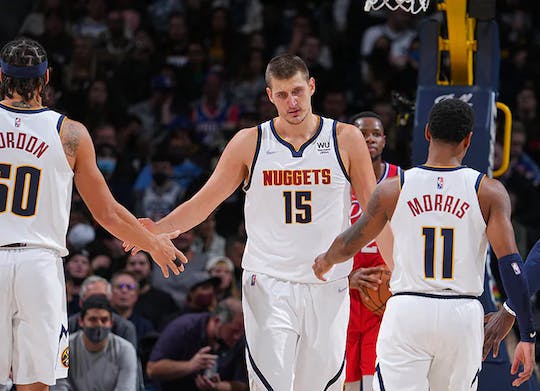 The Denver Nuggets have already faced a lot of adversity less than two months into the season.

Nikola Jokic has missed five games – one due to a scuffle with Markieff Morris and the rest due to a wrist injury on his shooting hand. This is unusual for the extremely durable Jokic, who did not miss any game during his MVP season. While Jokic recently returned to the lineup and nearly dropped a triple-double against the Miami Heat, having him back will not automatically turn the team’s fortunes around. So what should the Nuggets do to salvage the season?

Plain and simple: it’s time for others to step up.

Michael Porter Jr. could have been the guy to turn to other than Jokic. MPJ is fresh off signing a massive 5-year extension worth $207 million. The problem is that he struggled to get into rhythm early in the season. To add insult to injury (literally), Porter is now out indefinitely as he will undergo a surgery for his recurring back issues. His recovery time will depend on the extent of the damage and will only be known after the procedure.

MPJ has a tremendous upside, but as a fan, I struggle to enjoy his game at times. His lackluster effort mostly on the defensive side of the ball can get so frustrating especially since he has the ability to be such a threat on both ends of the court. Hopefully, when he comes back healthy, he’ll be able to correct this and reach his full potential. Maybe, just maybe, this will even help them get into the NBA Finals.

Then there’s Will Barton, the longest tenured Nugget. Being one of the veterans of the team, his consistency throughout the season has been admirable. I love how you see his heart and effort every single game. His leadership is going to be crucial this year while waiting for the return of Jamal Murray, who has not played since mid-April. Murray is expected to be back by the playoffs, but no real timetable has been announced yet.

Aaron Gordon has been up and down offensively this season, but he has shown flashes of brilliance especially during the absence of Jokic. He has more confidence in his shot as compared to last season. He has also stepped up to the challenge of being the primary defensive stopper of opposing teams’ No. 1 options. He’s running around chasing guards, and he’s bodying and holding his ground versus bigger guys. Plus, he has the motor to play long minutes.

AG is the catalyst for the Nuggets’ defense and staying out of foul trouble is crucial. Despite him showing that he accepts the challenge, he still needs some help against teams with deeper lineups like what we saw in their matchup against the Chicago Bulls. Without Jokic, Denver scrambled to find someone to go to in crunch time. After being down by double-digits, the Nuggets inched closer in the fourth quarter but could not complete the comeback.

Jeff Green, on the other hand, has been an awesome addition to the team. He’s smart and willing to play on both ends of the floor, which is crucial especially in tight games in the playoffs. He’s been doing a great job filling in for MPJ and I know he’s always ready to play. The question is, will his body be able to keep up with the big minutes? Only time will tell but I’m rooting for ya, Uncle Jeff!

Going deeper down the Nuggets bench is where things get shaky. Denver consists mostly of role players, which is perfect for when your team is at full health. The problem arises when the second unit is forced to fend for themselves. This is the time they usually struggle to find a consistent playmaker.

Rookie Bones Hyland has been fun to watch. He has displayed his true point guard potential, making high IQ plays and quick-trigger 3-point shooting. He’s definitely not scared to take a big shot and I believe he will be a great point guard in this league as he develops and gains more experience.

Other than that, you have Monte Morris, Facundo Campazzo, Austin Rivers, PJ Dozier (who recently suffered a knee injury), JaMychal Green, Zeke Nnaji, and Bol Bol. At the moment, none of these guys are really capable of taking over and controlling the game in the same manner that Murray or Jokic would.

In my opinion, the Nuggets are just an average team at this point of the season. I’m not too sure if they have actually improved much from last season, taking into consideration all the current circumstances. Jokic being forced to miss games has exposed the fact that a solid backup center is a must. I’m not a big believer in Jamychal Green’s ability to defend the top bigs in the league.

As a Nuggets fan, I would love to see Coach Michael Malone deploy Bol more often. For me, he is a diamond in the rough. I believe Bol has the potential to be unstoppable in this league as he develops. Based on his frame and skill set, the potential is limitless. He can already dribble, shoot the 3, and pass well. Once he develops his overall IQ and playmaking abilities, I’m sure he will become one of the more dominant and intriguing players that could really help this team win a championship in the future. Plus, being mentored by the reigning MVP should speed up the process.

This season has already been a roller coaster of a ride, but I think the Nuggets are ready to settle in and start putting together a few win streaks now that Jokic is back.

Jokic will give you his usual numbers but let's see who else will show up to help him out. The Nuggets, as a team, have shown resilience over the past few years. I’ll definitely be looking for them to sneak under the radar once again and make some noise closer to the playoffs.

Will the Warriors end the Raptors’ two-game winning streak?