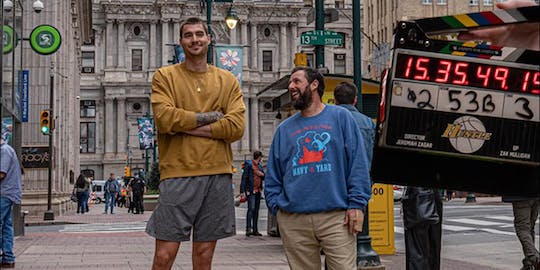 Who is your favorite character in Hustle? Is it Juancho Hernangomez and his portrayal of the main character Bo Cruz? Is it Stanley Sugarman—played by Adam Sandler—and his life as an NBA scout on the road? Anthony Edwards as the quotable villain Kermit Wilts was also a treat to watch. There are several NBA players and actors to choose from.

A humble suggestion, if you will, is Alex Sugarman. Probably not a top-of-mind pick for many, maybe even a third-round pick for some. Nonetheless, the character played by Jordan Hull (It can’t be a coincidence that her name is Jordan and she’s in a basketball movie) represents something more impactful.

Aside from the heartfelt father-daughter relationship which blossomed over the course of the movie, what’s eye-catching was her character’s knowledge, or lack thereof, about basketball. In NBA Twitter parlance, she’s a casual. And that’s what makes her special.

Hustle is a basketball movie for hardcore NBA fans. Average people who only watch the NBA during the playoffs or finals probably don’t know who Hernangomez is or even if they do, they’ll probably second guess which team he played for last season. What made Edwards’ character funnier and more authentic because basketball fans know that he’s exactly like that in real life. To those who aren’t familiar with the Minnesota Timberwolves star, they’ll think that he’s nothing more than an irritant.

There were also a lot of footnotes and easter eggs in the movie that probably only hoop junkies noticed. Sometimes it was the subtle things and other times it was the big plot pushing points. Take for example the scene where Stanley called Dirk Nowitzki in the middle of the night to persuade Bo that he was indeed a scout. Nowitzki is an international basketball legend and arguably an even bigger star in Europe being the big man who opened the doors to a lot of talent coming from overseas. So, Nowitzki vouching for Stanley meant that the random person outside Bo’s house is legit. If you didn’t know a thing about basketball, you’d be curious as to why Nowitzki had that effect on Bo.

Hustle brought a lot of authenticity and realness because not only did it feature several current and former stars, but it brought the fan into the inner works of finding NBA talent. From Stanley’s numerous trips to different countries, to going into the Philadelphia 76ers’ training facility, and showing what really goes down at the Draft Combine, it showed audiences what happens behind the scenes in the league.

But as much as Hustle was catered more to fans who have followed the game religiously, Alex Sugarman’s character was just as significant. She was on the outside looking in. She was curious and wide-eyed about not only what her father does for a living, but basketball as a whole.

When Alex suggested that they should film Bo together with the family’s doctor friend AKA Doctor J, it was hilarious. Of course, non-NBA fans would wonder why Julius Erving was nicknamed the Doctor.

Alex’s curiosity gave the film an invitation for fellow casual fans to dive deeper into the NBA. What kind of training do players do? Why go through specialized workouts with different trainers? Why is it so hard to get drafted into the league? Why is it important to have the right connections?

The way social media was used by Alex to amplify Bo’s draft chances was also worth noting. The NBA was one of the first professional leagues that fully embraced the power of video and something trending. Going viral can go a long way and the movie made a fun montage incorporating different NBA players like Luka Doncic and Allen Iverson.

Alex’s character was important to invite the casuals and the everyday fans. As much as the movie brought a ton of authenticity, it also needed a way to reach out to the non-hardcore audience. In the same way, that’s what the NBA has done and has continually been doing. You need the next generation to be invested in the game. The NBA needs more curious fans like Alex Sugarman.

Hustle turned out to be a pretty good movie, whether or not you’re a basketball fan. It was funny but not too funny. It had drama but not too dramatic. It was a way to show how hard it is to make it into the NBA. It was also a celebration of the game’s rich history and an avenue to welcome the next generation of fans.