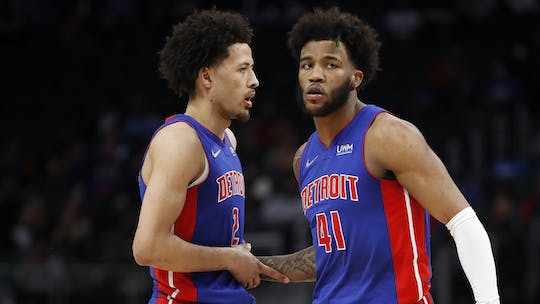 Hype is Real is an NBA.com Philippines series that gives an optimistic view of every NBA team heading into the 2022-2023 season. This is our way of convincing people why they should support and watch a particular team.

There’s really not much to say about the team’s overall performance last season. The Detroit Pistons were in Year 3 of their rebuild, and they performed exactly as expected.

They finished with 23 wins and 59 losses, slightly improving from the 2020-2021 season by three wins. That was enough to land the team exactly where they wanted to be, right near the top of the lottery.

The more interesting part about the Pistons was the development of their young core. In the 2020-2021 season, they drafted three prospects that immediately formed a large chunk of the rotation: Killian Hayes, Saddiq Bey, and Isaiah Stewart.

Of the three, it’s Bey that has truly impressed. In his rookie year, he played well enough to claim a starting spot late that season. He continued to improve in his sophomore year and entrenched himself as the team’s starting small forward. Stewart also claimed the starting center role and held on to that spot last season. He’s a solid, if not spectacular, big man option.

The only disappointment has been Hayes, who was drafted by the team to be their lead guard of the future. Unfortunately, that hasn’t panned out because of mediocre play on both ends of the floor. He’s been largely the same player in the two years he’s played and because of that, he’s lost his starting spot.

The best thing about the Pistons coming into this new season is that the team’s core is finally all in the same timeline. In the past two seasons, their best player was Jerami Grant. He’s still young, but he’s a player ready to contribute to a winning team right now. He was not meant to be on a team full of players starting out their careers.

The Pistons traded Grant in the offseason, which means they’re fully committed to the youth movement next season. Trading away their best player also opens up opportunities for…

Cade Cunningham. With Grant gone, Cunningham is the undisputed leader of the team. It was a slow start for last year’s top pick as he was dealing with an ankle injury he suffered before the season began. Once he got momentum, though, he grabbed the keys of the team and took over.

Cunningham’s scoring skills, combined with his basketball IQ and size, made him the ideal playmaker for the team. He played himself into contention for Rookie of the Year with a strong showing to end the regular season.

In March of this year, he averaged 22 points, seven assists, and nearly six rebounds per game. That was the best stretch of his season and showed the true impact he could have to lead the team. There’s still a lot of improvement for the new leader of the Pistons. He definitely has to clean up his turnovers, as he averaged 3.7 per game last season. There’s also an opportunity for him to improve his shooting where he only hit 41.6 percent from the field and 31.4 percent from beyond the arc.

The road is wide open for Cunningham to make a huge leap in his sophomore season now that he’s firmly in the driver’s seat in Detroit.

Another beneficiary of the Pistons’ offseason moves is Marvin Bagley. With Grant gone, nothing is standing in the way of Bagley claiming the starting power forward position on the team.

The Pistons bought low on Bagley after the Sacramento Kings gave up on their 2018 No. 2 pick. The big man repaid the Piston’s trust by gamely fitting into the back-up big man spot, purely focused on attacking the basket on picks. He averaged 14.6 points on a highly efficient 55.5 percent clip. Because of his showing with the team last season, Bagley was rewarded with a long-term contract, putting his mind at ease concerning his spot on the team.

With the Kings, he was put in a tough spot as the player the team drafted instead of Luka Doncic. Because of that, he was expected to perform at unrealistic levels. Now with the Pistons, he gets a fresh start, a well-defined role, and a clear path to success. At only 22 years old, he fits Detroit’s young core perfectly. He gets to slowly grow alongside an exciting group of players, with no undue expectations placed on him.

Next season is important for the young core that Detroit has built so far. It’s going to be interesting to see just how good this team is, and can be. Is Cunningham good enough to help the Pistons fight for a play-in spot? Can Bey and Bagley continue to improve within their roles on the team? Is Jaden Ivey the right fit for the team? Is Dwayne Casey the right coach for this young squad?

Those are questions they have to answer as a team this season. If they can take a massive step forward in terms of wins and individual growth, then that’s a clear message to their management that the team is on the right path. If they continue to hover at around 20 wins, then alarm bells will start to sound. The Pistons are still rebuilding but they’re in the final stages, ready to show the league what they’ve got so far.

The Rundown: Alvarado drops 38 in win over Nuggets