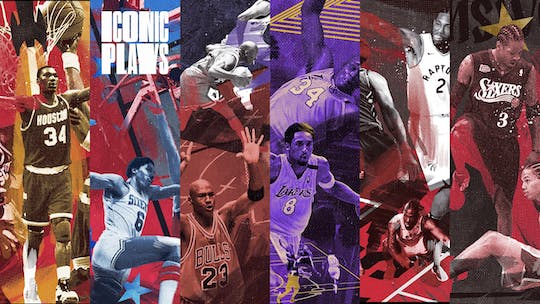 To celebrate the NBA’s 75th anniversary season, the NBA.com Philippines editorial team released "Iconic Plays", a six-part series that dives into special and unforgettable moments throughout the league’s 75-year history.

No highlight reel of the Kobe-Shaq Lakers would be complete without the incredible lob late in Game 7 of the 2000 Western Conference Finals.

Recalling the moment Julius Erving hung in the air for a baseline scoop reverse in the 1980 NBA Finals.

Hakeem Olajuwon won the game for the Houston Rockets with a putback late in OT in Game 1 of the 1995 NBA Finals against the Orlando Magic.

No one can forget the time Kawhi Leonard broke the hearts of the Philadelphia 76ers in the 2019 NBA Playoffs with a game-winning, series-clinching shot.

In overtime in Game 1 of the 2001 NBA Finals, Allen Iverson pulled off his signature crossover, knocked down the game-clinching shot, and stepped over Tyronn Lue.