Remember when Manu Ginobili and the Spurs crushed the Rockets’ hopes in the 2017 West semifinals with a game-saving, series-leading block on James Harden? 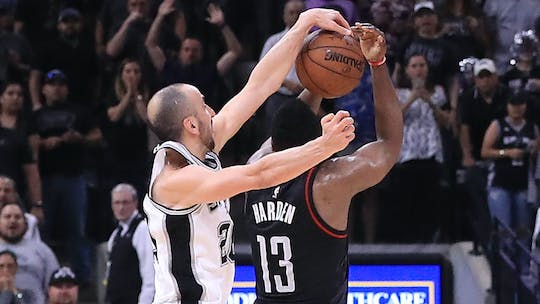 Not all blocks are created equal. Each block has its own distinct characteristics that make it special. One of the most iconic blocks in the history of the game—LeBron James’ Game 7 chasedown rejection on Andre Iguodala—can be best described as violently majestic.

The most recent denial of Giannis Antetokounmpo on Deandre Ayton in the 2021 NBA Finals was nothing short of miraculous, with the way Giannis was beaten and then in a snap, he wasn’t; the way he relied on the strength of his long, skinny fingers to do the work.

One particular block that happened in the 2017 playoffs was neither majestic nor miraculous. While both LeBron’s and Giannis’ blocks were visual poetry that featured superb physical specimens, this block was an old-school heist.

The stage was set in Game 5 of the Western Conference semifinals between the Houston Rockets and the San Antonio Spurs.

Harden had been playing an extraordinary game that needed an extra five minutes to decide. With 9.3 seconds left, Spurs up by three points, and a jump ball to decide the final possession, there was no doubt that Harden would find a way to tie the game.

The tip went straight to Ryan Anderson, a deadly sharpshooter in his own right who has a license to take big shots. Bigger shots, though, were assigned to Harden.

On cue, Anderson immediately looked for Harden as the seconds burned. Harden got the ball with only four seconds left, one long step away from the 3-point line.

Ginobili was covering Anderson initially, but a bit of scramble landed him in front of a determined Harden, who at that point had 33 points already.

Harden gave Ginobili one of his super convincing pump fakes, that even if he was in no position to launch, Ginobili was forced to shift his feet because…what if?

Then Harden leaned on Ginobili’s chest to create space. He sized his defender up, then gave him one of his patented, lethal jab steps. It worked, of course.

Ginobili went to his right as Harden went to his right, opening up a sliver of space. With Harden, that’s all he really needed. With exactly one second left on the game clock, Harden gathered himself for the 3, Ginobili left behind him in the dust.

Then, in a plot twist that we can only assume had been predetermined by the talented Mr. Ginobili, Harden went up for a 3–confident and sure.

Only, Ginobili’s strong hand had been waiting in the airspace where the ball would be. In one swift, clean motion, Ginobili pulled back his hand and with it was the basketball, and the potential game-tying basket. It looked more of a steal than a block, really.

The robbery was timed perfectly. With no time left on the clock, Ginobili capped off the act with pumped fists in celebration.

OTD in 2017, Manu Ginobili came up CLUTCH with a game-winning block on James Harden before the buzzer! 🚫🚨 pic.twitter.com/3OQAPisLH2

Harden looked stunned. Remember that scene in Ocean’s Eleven when it dawned on Andy Garcia’s character that his bank had been robbed from under his nose? That was Harden at the buzzer. Ginobili was the entire Ocean’s eleven trapped in one body.

It was such a cunning act of thievery, you’d have to wonder if that had been the plan all along.

Give Harden the 33 so that he’ll unanimously get dibs on the last shot. Have Ginobili cover someone else then switch at the last second for the surprise factor. Take the bait—the pump fake, the jab step—to let Harden think he’s in the clear. When he’s unsuspecting, snatch the ball away from behind. Leave no time on the clock.

If that was the masterplan, then Ginobili and the Spurs executed the heist to perfection, nailing every possible detail to steal the much-needed Game 5 win.

If not, then it’s also totally valid to conclude that Ginobili is just one hell of a basketball player with a special set of skills, a hybrid of genius and luck.

The Rockets would go on to lose the series the following game. This was Ginobili’s only block in six games.