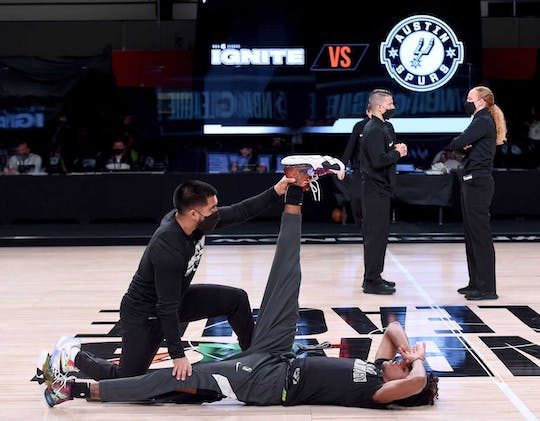 “With the second pick of the 2021 NBA Draft, the Houston Rockets select… Jalen Green from Merced, California and NBA G League Ignite.”

With those words from NBA Commissioner Adam Silver, the dream of 19-year-old Jalen Green officially became a reality. It was draft night in Brooklyn. Green, in his shiny gray pinstriped suit and bell bottom pants, was headed to the NBA.

He hugged his family. His face somehow got shinier and shinier than his suit as he walked to the stage. His smile got bigger and bigger as he wore the red cap with the Rockets logo up front.

Across the country, more than two thousand miles away, Ernie DeLosAngeles also had a huge smile on his face. DeLosAngeles, the head performance coach of Ignite, worked with Green during his G League stint early this year. DeLosAngeles couldn’t have been prouder.

Then a couple of picks later, the Golden State Warriors picked Jonathan Kuminga, another player from Ignite. Then much later, Isaiah Todd’s name was called.

The fashion choices of this new batch of G League alumni may have differed—Kuminga went with an all-orange suit while Todd wore maroon—but the absolute joy on their faces was uniform. Green, Kuminga, and Todd took the more unconventional route to the NBA, but they ended up in the same happy place, in a room full of people who just heard their names picked as worthy to play in the league.

“And I was just as happy as those guys,” DeLosAngeles told NBA.com Philippines.

Draft night was equally a special moment for him, after a frantic, exhausting, and unique eight-week experience at the G League bubble in Orlando.

In college, his plan was quite simple: finish business school, build some kind of business, and then make money off of it. But then his love and passion for sports just won’t let him do those entrepreneurial things. An anatomy class triggered something in him, and that’s all it took for him to change paths.

From business to sports science. From entrepreneur to athletic trainer. The switch was unexpected, but it might as well have been destiny.

“My mom always jokes with me that every assignment I did as a kid, I’d always talk about being a basketball player. I’d always write about sports,” said DeLosAngeles.

He did work in strength and conditioning training in football, soccer, and track before eventually landing a job as a strength coach for the Sacramento and Stockton Kings.

“The fact that I’m able to work with professional athletes is something that… I don’t feel like it’s work. It’s something that I do out of love and out of my passion,” he said.

The past year, he took on a new role as the head of performance training for Ignite. The task was challenging, as careers and lives of young athletes were put in his hands to nurture and develop. Add to the fact that he did the transition to a new program during a pandemic.

They had about eight weeks to complete the G League season. They were in a bubble, away from their families, isolated from the world. Each day played out on loop.

On top of that, games were also played back-to-back on a very tight schedule, making recovery time almost impossible for the players. For a trainer like DeLosAngeles, this was as stressful as it gets.

Good thing the restricted environment and the less-than-ideal setup brought the players and the support staff closer. Relationships, both within the team and outside, were built.

“We’re all competing but we all want our guys to play, not get hurt, and make it through the bubble safely,” DeLosAngeles said.

On the court, the bond among the Ignite players translated to extra passes and generally having fun playing basketball.

“That type of stuff was rewarding because it was like, ‘Hey, right now at this point, we’re all we have. In this bubble, this is all we have,” DeLosAngeles said.

Green, who DeLosAngeles describes as “truly a special talent” was Ignite’s biggest star. He was young, but the G League experience forced him to fast-track the maturity process.

“To me, the most that’s impressive about Jalen is his approach to the game. It really stood out to me to see him get better not just each game, but each quarter. From one moment to the next, I felt like he was improving,” said DeLosAngeles.

DeLosAngeles and Green also shared a unique bond because of a common thread: their Filipino roots. In their downtime, they would talk about the Philippines.

Green would share about that time he played in front of Filipino fans. DeLosAngeles would tell him about his dream of one day visiting the Philippines.

“He is very proud of his Filipino roots,” DeLosAngeles said of Green. “I wouldn’t be surprised seeing him doing some kind of camp or training over there in the future.”

Green is just about to start his NBA journey, but the work has started long before. That’s where DeLosAngeles comes in, in the developmental stage of building the right habits and proper mindset.

That’s something he’ll keep on doing. The next Jalen Green is still out there needing help both in the physical aspect of the game and in being a complete pro.

“I just want to help them achieve their dreams,” DeLosAngeles said.

“When they achieve their dreams, it’s like also achieving my dreams and fulfilling my call.”