If NBA 2K comes up with the “Kobe Challenge” – similar to NBA 2K11’s “Jordan Challenge” – which significant moments in the Black Mamba’s career should be included? 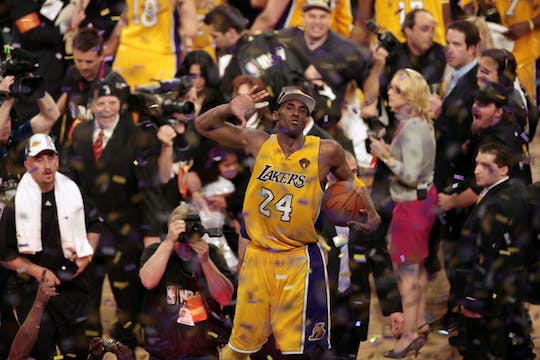 NBA 2K has been the cream of the crop of yearly sports video game releases for more than a decade because of their continued innovation.

And yet, 2K has missed out on bringing back one of its best features ever that would have tied in to all their releases of Legend editions of their game over the last few years. All the way back in 2010, 2K11 came out with plenty of flair, being the first 2K to have Michael Jordan back as a legend.

They celebrated the momentous occasion with a whole story mode-ish feature called the “Jordan Challenge". They took players into 10 of the most iconic moments in Michael Jordan's career and had them see if they could replicate His Airness' exploits on the sticks. If you complete the challenge, you unlock a pair of Jordans for your MyCareer character to use.

2K has added a multitude of features since 2K11, but has notably skipped bringing back these challenges as they continue to feature more legends on the cover. For 2K22, they have Kareem Abdul-Jabbar, Dirk Nowitzki, and Kevin Durant on the Legends edition. Think of all the possibilities!

For this article, we try to rectify 2K's oversight and provide a similar challenge for a legend 2K has featured several times since 2016: Kobe Bryant. You may already have moments from the Black Mamba's career playing out in your head.

Let's go over the top 10 that would complete the “Kobe Challenge” for a hypothetical 2K release.

The Little Lakers Boy vs the GOAT

Michael Jordan wasn't just an inspiration for Kobe Bryant, he was an obsession.

“What you get from me is from him,” Bryant said in Jordan's Netflix documentary The Last Dance.

It’s no wonder several of Bryant's most iconic moments came against Jordan. They met 11 total times in the NBA – eight in the regular season and thrice in the All-Star game. Arguably, Kobe's first iconic moment in the league was the first time he truly dueled with Jordan.

Kobe and Jordan met twice in the 1996-1997 season, but Kobe barely got any playing time in his rookie year. The following season, Kobe hopped off the bench in the Lakers' first meeting against the Bulls and had himself a game.

Young Mamba flashed all the tools in his developing bag and dropped 33 points on 12-for-20 shooting with three 3s, three rebounds, and two assists. Kobe even hit a fadeaway over Jordan this game.

But Jordan had the better of Kobe and the Lakers as he led the Bulls to an easy 104-93 win with 33 points. This was probably the first time Kobe looked like a superstar and this performance was just a precursor to his first All-Star appearance later that season.

The 1999-2000 season was a testament to the singular dominance of Shaquille O'Neal, and the Finals was Shaq's crowning moment. The season MVP would later win Finals MVP after averaging an absurd line of 38 points on 61.1 percent shooting with 16.7 rebounds and 2.7 blocks against the Indiana Pacers.

But it was Kobe who shined in the series' biggest moment. In Game 4, Shaq was rolling through overtime, but fouled out with 2:23 left on the clock. With the Lakers only leading the series 2-1, a loss would have meant a tied series with still one game left to play in Indiana.

This was the signal for Kobe to take over. Throughout the 1999-2000 season, Kobe had his moments and showed he was more than just a sidekick to Shaq. But these final two minutes of Game 4 were the first glimpse of the clutch legacy Kobe would leave behind. He scored on the next three possessions then dove to the hoop for a putback that put the Lakers up for good.

This might be the toughest Kobe challenge on the list as players will need to score at least four times and ensure a Lakers victory when they’re taken into the final two minutes.

Kobe had 25 50-point games in his career, but the first one was pretty special. In an early season matchup against the Golden State Warriors, Kobe was feeling himself, going 18-for-35 from the field for 52 points, seven rebounds, eight assists, and two steals.

Kobe's first 50-point explosion might be one of the easier challenges on this list as all the player needs to do is get Kobe to 52 points on similar efficiency. The Warriors wound up winning this game as future Laker Antawn Jamison matched Kobe bucket-for-bucket with 51 points. This remains the only time two opponents scored 50 in the same game.

More than the Boston Celtics, the San Antonio Spurs were the Lakers' biggest rivals during the Kobe era. The Spurs may have had a couple of wins against the Lakers throughout their dynasty, but Kobe dominated San Antonio throughout his career.

Young Kobe was not about to let the Spurs get in their way in the 2001 Western Conference Finals. The Lakers were dominating the playoffs up to that point, sweeping the Sacramento Kings then the Portland Trail Blazers for a 7-0 record. The Spurs finished the regular season with the best record in league and were seen as the perfect foil for the Lakers with their twin towers of Tim Duncan and David Robinson sure to give Shaq some troubles.

Enter Kobe, who was already scorching hot entering the series. He entered the Alamodome and torched the Spurs with 45 points on 19-for-35 shooting and 10 rebounds. This was a classic early 2000s game heavy on defense and slight on offense, save for Bryant, who went on to set the tone for another Lakers sweep.

As stated earlier, Kobe wouldn’t be Kobe without MJ. In their final game, Kobe made sure to take the reins from his big brother emphatically.

Right from the start of this late regular season matchup, it was easy to tell that this was going to be between Kobe and MJ. Jordan, then in the twilight of his career and on his way to his third and final retirement, was on fire early. But Kobe wouldn’t be denied.

Kobe wound up scoring 42 points in the first half alone with seven threes. He finished with 55 points on 15-for-29 shooting with nine threes and five rebounds, three assists, and three steals. The Lakers dominated this one so much, Kobe barely had to play in the fourth quarter.

Aside from scoring a ton of points in just a few minutes, 2K players would have to make sure to limit Jordan to 23 points or below.

This was the passing-of-the-torch moment between two of the game's most dedicated students.

The Black Mamba everyone got accustomed to probably didn't fully take form until the post-Shaq era of the Lakers. There weren’t a lot of wins for Lakers fans on the court, but we did get to see Kobe take his game to the limit.

The 2005-2006 season is probably the most important season of Kobe’s career because this was when his myth became reality. He turned scoring into an art form few have matched before or since. The second best game from this season came when Kobe scored 62 points against the Dallas Mavericks.

This is THE quintessential Kobe experience. You probably know the myth behind this game by now, but one very understated fact about Kobe going for the second most points in a game in NBA history was that the Lakers needed each of his 81 points to escape the Toronto Raptors at home.

In total, Kobe went 28-for-46 from the field with seven 3s, six rebounds, two assists and three steals. This was Kobe at his most determined. He earned every non-believer's respect by showing them what history looked like. Kobe went on a crazy scoring spree that season, but nothing encapsulated him more as a player than the 81-point game.

The season of game winners

After his first title as the Lakers' leader, Kobe went on to have a better encore the following season. Though it didn't have as many 50-point explosions, the 2009-2010 season featured the bulk of Kobe's game-winning shots.

He had a total of five game-winners that season – shots that put the Lakers ahead with less than five seconds to go. It would be fun to have all these shots lined up in a sequence for players to relive one of Kobe's craziest streaks. A list of Kobe moments would not be complete without the clutch moments.

All Laker legends have their moments against the franchise’s biggest rivals, the Boston Celtics. Kobe had failed to lead the Lakers past Boston in the 2008 Finals and he got his shot at redemption in 2010.

There were plenty of iconic moments. Though Kobe didn't have his best statistical playoff performance throughout this seven-game series, he did still pull off offensive gems in front of a Celtics defense designed to limit him.

Game 7 was the most iconic match, but Game 3 was Kobe's moment. In a low-scoring, grimey outing in Boston, Kobe managed 29 points on 10-for-29 shooting with seven rebounds, four assists, two steals and three blocks to lead the Lakers to a win and a crucial 2-1 series lead.

In what was his last Finals appearance, Kobe cemented his name on Lakers lore by willing his team past the Celtics.

Kobe’s prime lasted until the fateful game in which he tore his Achilles. Though it would be cool to look back on the Mamba hitting two free throws with a torn Achilles tendon, it doesn't make for the best mechanics for a video game as dynamic as 2K.

If there was one underrated part of Kobe’s game, it was his passing. Every time he was called a ball hog, Kobe would go out the following game and make it a point to rack up dimes.

This was the narrative floating around in January 2015 before the Lakers met the Cleveland Cavaliers in Los Angeles. In the buildup for what should have been an innocuous regular season game, the Kobe and LeBron comparisons flew out from every corner of NBA punditry. The biggest advantage LeBron had over Kobe was apparently his passing.

So when the game came, Kobe did his best Steve Nash impersonation, constantly finding teammates for a career-high 17 assists. Kobe also had 19 points and six rebounds in a loss for the Lakers. In the twilight of his career, Kobe still had petty juice in him to shut the critics up every once in a while.

If there was any doubt that Kobe lived for the biggest moments, they were put away in his final game.

Leave it to one of the best performers in the game's history to go out on top, scoring 60 points on 22-for-50 shooting. Kobe was getting the ball in every possession he wanted, and he gave the fans one more moment to celebrate him by.

Kobe got to stick it to the Utah Jazz one last time, and he gave us one more perfect moment to try and recreate in 2K.