With Kevin Durant and James Harden out, Kyrie Irving remains a road-only player for Brooklyn as the team tries to stay afloat in the East. 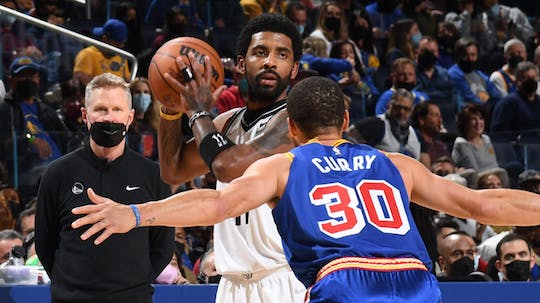 SAN FRANCISCO – Of course, the hometown fans booed the opponent’s star player. Why wouldn’t they?

The Golden State Warriors showered Brooklyn Nets guard Kyrie Irving with boos during lineup introductions. The same thing happened when Irving stepped to the free-throw line. But the intent behind the taunts was different than what most visiting stars receive from opposing fans.

“This crowd, we know each other well,” Irving said, laughing. “It’s not any surprise when I come in here. Different arena, obviously. But it’s still the same court and group of fans that have a reason to cheer for their team. They’ve been very successful.”

In the Nets’ 110-106 loss to the Warriors on Sunday (PHT) at Chase Center, Irving finished with a season-high 32 points while shooting 9-for-21 from the field, 3-for-8 from 3-point range and 11-for-12 from the free-throw line to go along with seven assists. Despite his strong performance, Irving’s COVID-19 vaccine refusal and part-time availability for Brooklyn this season remained in the spotlight.

No surprise, either, that Irving scoffed at San Francisco supervisor Matt Haney, who argued to the San Francisco Chronicle that Irving should not have been permitted to play. After all, city ordinances require both Warriors players and all fans to be fully vaccinated to enter Chase Center.

Set aside the health concerns that Irving’s refusal to receive the COVID-19 vaccine affects his safety and those around him. Irving has shown he can thrive as a part-time player and play through the boos. But as the Nets (29-20) have shown throughout the 2021-22 season, the team itself does not seem equipped to handle Irving’s part-time availability because of the New York City mandate for everyone to be fully vaccinated at large indoor gatherings.

Not when Irving’s evolving status has disrupted the Nets’ starting lineups and depth chart. Not when the Nets have missed Kevin Durant (sprained MCL in left knee) the past seven games and have gone 2-5 without him. Not when they nursed more injuries before Sunday’s game to James Harden (right hand strain)and Joe Harris (left ankle surgery) as well as during the game to LaMarcus Aldridge (left ankle sprain).

“What Brooklyn is dealing with is unprecedented as far as I know,” Warriors coach Steve Kerr said. “It can’t be easy going back and forth playing him, starting him to not having him at all. That has to be very difficult.”

The Nets have insisted otherwise.

Nets coach Steve Nash expressed optimism that Harden will play in Wednesday’s (PHT) game against Phoenix. He could not say the same thing about Aldridge, who left the arena on crutches. Regardless, Nash has viewed Irving’s fluid availability in line with what the Nets and 29 other NBA teams have fielded this season amid fielding absences related both to conventional injuries and COVID-19.

“We’ve had so many injuries and interruptions this year and availability issues that to add a player of his caliber, even if it’s just been on the road, it’s much needed and great for our group,” Nash said. “Fortunately, the reality of the last 18 months for us is we’ve never had an extended run of health. So, to have a player that plays on the road and at home is not that different than what we faced week to week, anyways. It hasn’t been as strange for our group. It hasn’t been strange at all in some weird way. It actually feels normal because we’ve had so many interruptions and injuries.”

But no matter how much the Nets insist it is normal, it really isn’t. Sure, Durant, Irving and Harden may not actually need much on-court time to maximize chemistry and exert their dominance. They had a chance to win an NBA title last season despite playing together in only eight regular-season games and six postseason contests. But then the Nets fell to the Milwaukee Bucks in the second round partly because Harden and Irving fielded overlapping injuries while Durant carried too large of a workload without much help elsewhere.

Similar elements are happening this season. The Nets coasted to a dominant win against Chicago earlier this season when their three stars played together. Other than that, the Nets have gone a combined a 1-9 against the NBA’s elite, including Chicago, Philadelphia, Milwaukee, Phoenix and Golden State.  Durant has averaged 36.5 minutes partly because of Irving’s absence, which marks the most playing time he has logged since the 2013-14 season in Oklahoma City. Any player can experience an injury, especially after missing an entire season two years ago because of an Achilles injury. But Durant’s increased workload certainly didn’t help his chances to stay healthy. And it could have been avoided had Irving become available for the entire season.

Meanwhile, the Nets do not have the depth to absorb Irving’s fluid availability, either. Credit the Nets’ fight all you want against Golden State. But you can’t help but wonder if Irving could have trimmed his five turnovers and the Nets could have improved their shooting numbers (39.8%) had the team’s supporting cast actually had more time to play together. Meanwhile, the Warriors absorbed poor shooting nights from Stephen Curry (5-for-18) and Klay Thompson (5-for-14) and injuries to Draymond Green and Andre Iguodala because the team’s supporting cast has experienced more continuity.

“That‘s the challenge for us tonight, as much as anything. It’s not just Kyrie. This is a group thing. These guys have not played as many minutes together,” Nash said. “But Kyrie fits into any team. He’s outstanding on the offensive end. And I know he has the talent to do it defensively as well.”

And the Nets seem convinced they have the talent to overcome all of their issues. Fair enough. Kerr saw in the past as a former player with the Chicago Bulls and a coach with the Warriors how stars alone can overcome overlapping injuries, complacency or continuity.

In the Nets’ case, however, their margin for error seems too slim. The Bucks have mostly the same roster that won last season’s NBA title. The Sixers have absorbed Ben Simmon’s ongoing absence just fine. The Heat have become accustomed to playing through injuries.

The only way the Nets can overcome this? If Durant and Harden become fully healthy for most of the rest of the season.

“A team like Brooklyn, if they’re fully healthy and loaded, they are going to be a beast try to take down,” Kerr said. “It’ll be fascinating to watch.”

Yes, it will. Harden might return as early as Wednesday’s (PHT) game in Phoenix. But after the Nets’ stops in Sacramento (Thursday), Utah (Saturday) and Denver (Monday), can Harden assume a heavier workload without Irving in Brooklyn? It is not yet clear when Durant will return. But once he does, can he do so without compiling the kind of heavy minutes that left Nash worried? Through all of this, will Durant and Harden still remain deferential toward Irving’s refusal to get vaccinated so that he can become a full-time player? Or will resentment eventually emerge?

It is relatively easy to toe the company line now. Most coaches and players on championship-contending teams exert patience and pick their spots when scrutinizing developments before the All-Star game. But once the Nets aim to ramp up for the postseason, it would not be surprising if Durant and Harden do not feel like being as diplomatic privately or publicly with handling Irving’s fluid availability.

As for now, Irving can laugh off the boos or the criticism all he wants regarding his unvaccinated status. He has tried to quiet that noise by letting his play speak for itself. As Irving said, “we have aspirations of playing down into the late postseason.”  Unfortunately for the Nets, those aspirations might become just a pipe dream.