Is it time to break up the Jazz band?

After another playoff flameout, the Jazz need to answer some hard questions in the offseason. 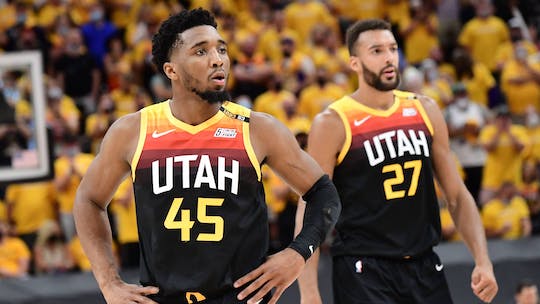 The Utah Jazz aren’t a dramatic team. They’re not a team with larger-than-life personalities that attract negative energy. They’re usually an even-keeled team that lets their play do the talking. This season was different - there was a lot of drama, which is usually a symptom of a team succumbing to the pressure of expectations.

Everyone, from the players, coaches, and even the fans, felt the strain of this season. The main issue that everyone focused on was the relationship of Utah’s All-Star duo, Donovan Mitchell and Rudy Gobert.

Both players had very solid seasons. Mitchell pretty much played to the same averages that he collected last season (26-4-5). Which was good enough to get him another All-Star nod. Gobert, also selected as an All-Star, was slightly better this year. He upped his averages from last year to lead the league in rebounding and field-goal percentage.

While Mitchell and Gobert had good seasons individually, they weren’t better as a pair. Rather than grow together to help the team achieve more, the Jazz were actually worse this season. Because of that, the declining relationship between Mitchell and Gobert was put under the microscope.

Back in January, Gobert openly talked about his appreciation for how Devin Booker improved on the defensive end.

Oh, I didn't know things were THIS bad with the Jazz... pic.twitter.com/JRhhLfojZs

While it may seem like it was a compliment to Booker, it also felt like criticism towards Mitchell, who’s often grouped with Booker as one of the best young wings in the league. Mitchell’s defense can be lacking at times and Gobert is left cleaning up the mess when an opponent easily gets past Mitchell.

The partnership of the two on the offensive end might even be worse. Early in April, a stat came out that Mitchell only passed to Gobert 151 times during the season.

Joe Ingles has passed the ball to Rudy Gobert 174 times this season.

Donovan Mitchell has passed the ball to Rudy Gobert 151 times this year.

Joe Ingles tore his ACL over two months ago.

McCade Pearson wasn’t even counting assists. He was just counting passes. What made the stat even more shocking was that Trae Young had more assists to Clint Capela during the same stretch, 152 assists compared to 151 passes.

Quin Snyder had to defend the duo with a lengthy 19-minute monologue to the media, debunking the idea that Mitchell and Gobert don’t get along. The narrative grew so loud that the national media started picking it up, further amplifying the chatter. It got so bad that even the Jazz social media team got on board to fight the narrative as well.

That game-winning play was probably the highlight of the Jazz’s season. A few days after that win, they were booted out of the playoffs by the Dallas Mavericks.

The same problems they had in their previous playoff stints once again resurfaced. Gobert talked about communication and effort back in January, and that still wasn’t present in the first-round loss to Dallas. Gobert wasn’t faultless as well. He still couldn’t defend in the perimeter and because of that, he got schemed out when the Mavs started switch-hunting.

If the Jazz can’t defend in the playoffs and Snyder (or the social media team) can’t defend the Mitchell-Gobert pairing, are things really working out in Utah? This can’t even be counted as continuity anymore. The Jazz reached their peak last season and are now just slowly making their descent.

It’s obvious after this exhausting season that there’s still a clear lack of championship potential with this roster. The new Jazz CEO, Danny Ainge, and part-owner, Dwyane Wade, are both champions. They know what works and what doesn’t. It wouldn’t be surprising if they decide to shake things up. Or in this case, blow it all up. It looks like the Jazz have played their final note. It’s a shame that it ended not with a loud crescendo, but with a dramatic whimper.