Thomas will play for Team USA this weekend in a pair of FIBA AmeriCup qualifying games. 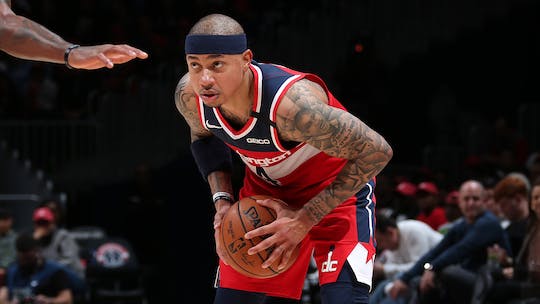 Isaiah Thomas last played in the NBA in Feb. 2020 for the Washington Wizards.

(AP) — There was a day last spring when Isaiah Thomas noticed he could lift his leg without any pain. That hadn’t happened in years.

This weekend, he plans to show the NBA what that means for his game.

More than a year removed from his last NBA appearance, and nine months after surgery that he says fixed a bone-on-bone condition in his right hip, Thomas has games to play. The two-time All-Star is suiting up with USA Basketball for a pair of FIBA AmeriCup qualifying games in San Juan, Puerto Rico — and Thomas expects NBA teams to be watching.

“My ultimate goal is to play in the NBA as soon as possible,” Thomas, 32, told The Associated Press. “This allows me to compete against other professionals, represent my country at the same time — which is an honor and a privilege — and ultimately show NBA teams that I’m back to myself and I’m 100% healthy. That’s why I chose to come here. When Team USA brought it to me, it was a no-brainer.”

The games technically don’t mean much to the U.S.; the Americans already have qualified for the AmeriCup tournament that will take place in September 2022. But to Thomas, the matchups against the Bahamas on Friday and Mexico on Saturday mean plenty.

“My skill didn’t go anywhere,” Thomas said. “The biggest question was whether I am 100% healthy. I am now, so why not show it on a stage with ‘USA’ across your chest?”

Thomas is part of a U.S. roster loaded with NBA veterans for these two qualifying games. Joe Johnson is on the team, as is Brandon Bass, and there are five more players besides Thomas with some degree of experience within the league.

Typically, U.S. rosters for these qualifying games are almost entirely composed of G League players, names that aren’t exactly of the household variety. The NBA names add tons of intrigue, as does Thomas’ return to game action.

“Isaiah, he’s got a spirit about him, a love for the game that I’ve seen not only from the conversations that I had with him before we arrived, but even since we’ve been practicing,” said Joe Prunty, who will lead the U.S. coaching staff in these two games. “He has looked good.”

Johnson — the 39-year-old who scored 20,405 points in his 17 NBA seasons — offered even more praise after seeing Thomas in practices this week.

“He looks great,” Johnson said. “One thing I’ll say: In pick and rolls, I think he’s probably going to be unstoppable. Bigs, I don’t know what they’ll do. Do you get out and hedge? He’ll go around you and split you. Do you try to catch him? He’ll pull up for the jumper. He has a great arsenal. It’s been fun to watch him play, man. I will tell you that.”

The Marathon Continues 🏁🇺🇸@isaiahthomas is locked in for our upcoming @AmeriCup Qualifiers. pic.twitter.com/yestnCcDj1

Thomas last played on Feb. 3, 2020, for Washington. He was traded to the Los Angeles Clippers three days later, then waived, and hasn’t appeared in an NBA game since. The hip surgery — resurfacing, it’s called — was performed three months later, and Thomas said the hip felt better immediately.

So now, he’s plotting another way to defy the odds.

“I’ve already proven who I am,” Thomas said. “I still love the game. I just need an opportunity.”

The 2017 season is when four years of pain, both physical and personal, started. On the eve of the Celtics’ playoff opener, sister Chyna died in a car crash. Thomas played on, scoring 53 points in a second-round game on what would have been his sister’s 23rd birthday. But the hip issues already had started, and Thomas was shut down later that postseason.

That summer, he was traded to Cleveland for Kyrie Irving. Nothing has been the same since; he’s appeared in only 84 games, averaging 12.8 points.

G League teams talked to him about playing this season; that was never a serious consideration for Thomas. When USA Basketball called, he leaped at the chance.

“I’m as good now as I’ve been in any point in the last three years,” Thomas said. “Playing for USA Basketball is going to allow teams to see the way that I’m moving, the way that I’m playing, that I am back to myself, back to being the player that everyone is accustomed to seeing. I have strong belief that after they see me this weekend, somebody is going to pull the trigger and give me that opportunity — and I’m going to be more than ready for it.”