Top prospect Jalen Green says he will use all the knowledge, advice, and experience he got from his G League stint. 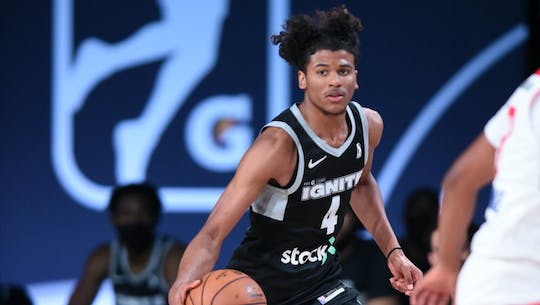 Jalen Green is gunning for NBA Rookie of the Year.

A lot has been written and said about Jalen Green—the explosive, stylish 6-foot-6 guard with Filipino roots—but let this be the one we talk about first.

He’s made it simple. He’s made it clear. He’s going into Year One as a top-five, maybe top three, draft pick. He’s going out as the clear-cut No. 1. That’s what he said when he was asked what his goals are for his rookie season.

Green, wherever he lands, expects to make an immediate impact. He has the game to back that up. In 15 games with G League Ignite, Green collected highlights with game averages of 18 points, four rebounds, and three assists.

He has the vibe that’s unmistakably Jalen Green: one of one, unique, special. Off the court, it’s easy to spot. The fun hair. The loud fits. The leg ink.

On the court, it’s the freakish athleticism.

Then, there’s the special route. Instead of taking the more traditional step from college to pro, Green took a huge leap to the G League, where he played among men.

This move, Green believes, gave him an advantage over his peers.

“I feel like the G League is one step ahead of college [basketball]. You learn how to become a pro on and off the court,” he said in a media availability session early Wednesday (PHT).

The NBA Draft is just a couple of days away!

It helped him understand key aspects of the pro game like pace and offensive schemes, he added. Green picked up a lot of these from his Ignite head coach, NBA legend Brian Shaw, a three-time champ as a player and a two-time champ as an assistant coach.

“He knows what it takes to get there,” Green said.

What Shaw taught Green transcends basketball moves. It’s the work ethic, the mental game, the winning mindset. All these, all the highs and lows, the dunks and the miscues, Green will use on his quest to be the best rookie.

“I’m going to bring everything that I’ve learned in the G League. I learned a lot in the G League—a lot of knowledge, advice, experience,” Green said.

“Everything that I learned, I’m going to take with me.”