The superstar guard became the 5th player in NBA history with a triple-double and no 2-point baskets. 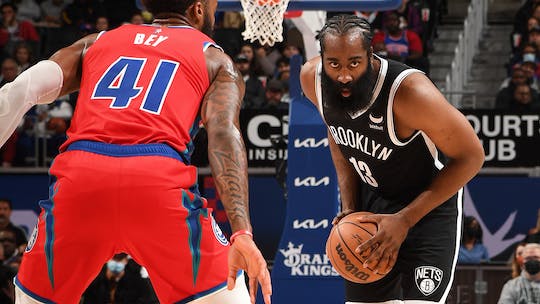 James Harden earned his 60th career triple-double in the Brooklyn Nets’ 96-90 victory against the Detroit Pistons on Saturday (PHT), passing Larry Bird for seventh-most of all-time.

Harden scored 13 points, dished out 10 assists and grabbed 10 rebounds for his second triple-double of the season. He became the fifth player in NBA history with a triple-double and no 2-point baskets, joining Jason Kidd, Delon Wright, Steve Blake and Kirk Hinrich.

?? 2nd triple-double of the season
?? 60th of his career@JHarden13 has passed Larry Bird for 7th all-time 👏 pic.twitter.com/sMrsuuUgSh

Congrats to @JHarden13 of the @BrooklynNets for moving up to 7th on the all-time TRIPLE-DOUBLES list! #NBA75 pic.twitter.com/xjHXaBSji1

James Harden is now the owner of only the fifth triple-double in NBA history that included exactly zero 2-point baskets.

Delon Wright, Steve Blake, Jason Kidd and Kirk Hinrich had the others.

In Saturday’s win, not only did Harden surpass Bird but he also moved into 32nd on the all-time scoring list, passing Hall of Famer Clyde Drexler.

With this three, @JHarden13 passed Clyde Drexler to move into 32nd on the all-time scoring list 🙌🙌🙌 pic.twitter.com/LeQrSN2hxV


The Nets star recorded his first triple-double of the season, also against the Pistons, just six days ago as Brooklyn took down Detroit 117-91.
Read Next
News