The standout frontcourt players take home the honors for Week 9. 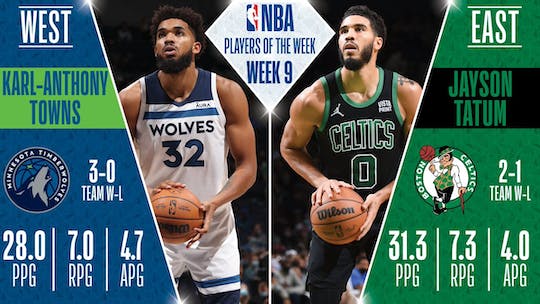 Boston Celtics forward Jayson Tatum and Minnesota Timberwolves forward/center Karl-Anthony Towns have been named the NBA Players of the Week for Week 9.

Minnesota’s star big man was a standout throughout Week 9 as the Timberwolves rolled up a 3-0 mark. Towns averaged 28 points, 7.0 rebounds, 4.7 assists, 1.7 steals and 1.3 blocks on 54.7% shooting in wins against the Nuggets, Lakers and Mavericks. The Timberwolves (15-15) are the No. 8 seed in the West standings.