The stars for Boston and Minnesota claim the honors for Week 22. 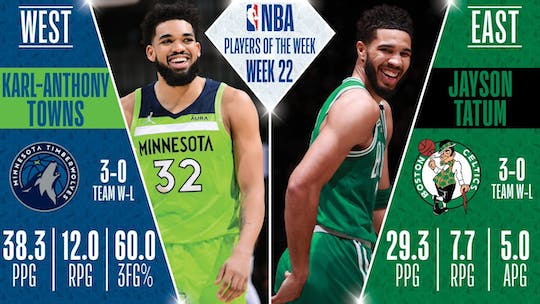 Boston Celtics forward/guard Jayson Tatum and Minnesota Timberwolves forward/center Karl-Anthony Towns have been named the NBA Players of the Week for Week 22 of the 2021-22 season.

The Celtics’ star helped Boston to a 3-0 week with averages of 29.3 points, 7.7 rebounds and 5.0 assists. His best performance of the week came against the Denver Nuggets on March 20 when he logged 30 points, six rebounds and seven assists in a 124-104 win. The Celtics (44-28) are currently the No. 4 seed in the East standings.

The Wolves have won four straight — including all three of their games last week — thanks largely to the play of Towns. He averaged 38.3 points and 12.0 rebounds during the week, and piled up 60 points, 17 rebounds and three assists to set the Timberwolves’ single-game scoring record in a March 14 win against San Antonio. The Timberwolves (42-30) are currently the No. 6 seed in the West standings.