Philadelphia lost its leading scorer and rebounder early in Game 4. 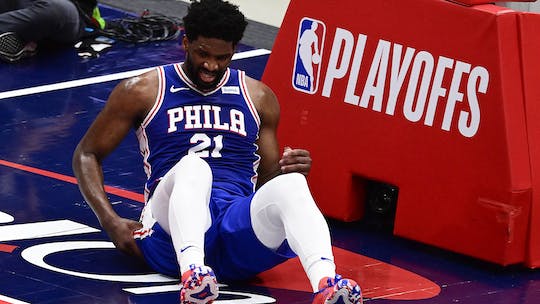 Embiid had an MRI on Tuesday and his status will be decided before Game 5 of Philadelphia’s game against the Washington Wizards, a person familiar with the decision told The Associated Press.

The person spoke to The AP on Tuesday on condition of anonymity because the decision was not made official.

The Sixers lead the Wizards 3-1 in the first-round Eastern Conference series. Game 5 is Wednesday night.

The NBA MVP finalist wound up on the floor behind the baseline after having his shot blocked by Washington’s Robin Lopez on a drive to the basket in the first quarter.

After staying down for a moment, a wincing Embiid rose and then put his hand on his lower right back.

He remained in the game for the time being, before eventually heading to the locker room in the last minute of the period.

Through the first three games of the series, Embiid had been nearly unstoppable, averaging 29.3 points, 7.0 rebounds and 1.0 steals while shooting 67.4% overall and 54.5% from 3-point range.

Through the series’ four games, the 76ers have been outscored by 17 points over the 97 total minutes Embiid did not play.