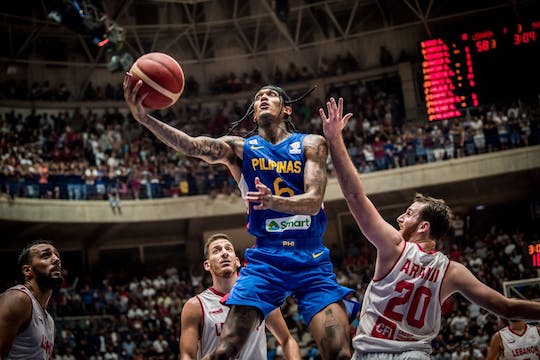 Jordan Clarkson scored 27 points in the Gilas Pilipinas Men's 85-81 loss to Lebanon in the fourth window of the FIBA Basketball World Cup 2023 Asian Qualifiers in Beirut on Friday.

The Utah Jazz star, who suited up as a naturalized player for the Philippines, also grabbed six rebounds and dished out seven assists but had four turnovers and only shot 35 percent from the field.

NBA prospect Kai Sotto of the Adelaide 36ers chipped in 10 points, eight rebounds, and two blocks in the loss.

Despite the setback, Clarkson was pleased with their effort and remains optimistic about the team's potential.

"We're just getting this team together. We got some good young stars on the team. Dwight [Ramos] played really well tonight as well. Kai played well. I think it was an all-around really good effort," Clarkson said after the game.

"We had a chance to win the game. I missed some shots towards the end of the game I feel like I usually make as well. Just a tough one tonight, we just gotta take it on the head, get back to the drawing board."

Clarkson and Gilas Men, who hold a 2-3 record in the World Cup Qualifiers, hope to bounce back in their next assignment, which is against Saudia Arabia. The game will be played in Manila at the Mall of Asia Arena on Monday.

"We’re going to be prepared for that and try to get a win at home," said Clarkson.