Jordan’s legacy all over All-Star Weekend

Nineteen years after his last NBA All-Star Game, Michael Jordan stole the show as he graced this year’s All-Star festivities in Cleveland. 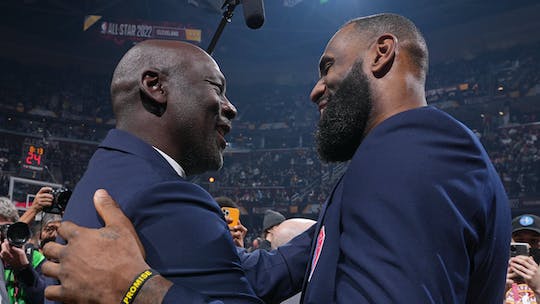 Years ago, when LaMelo Ball was only two years old, Michael Jordan played in his last All-Star Game. It was an All-Star Game that’ll forever be remembered as having an asterisk because it went on longer than it should've and ended in a way it shouldn’t have.

Jordan hit an impossible fadeaway over the stretched fingertips of Shawn Marion with about five seconds left in overtime to give the East squad the lead. What a moment that was. Just like The Last Shot in Utah, that shot should’ve been it for the All-Star MJ experience. But as we know now, things don't always end like that for Jordan. Things don’t end for Jordan, period.

So fast forward to 19 years later at the 2022 All-Star Game, Michael Jordan is still making the warmest, most memorable, show-stopping highlights. Here are some of them:

MJ gets honored at the #NBA75 ceremony ?? pic.twitter.com/JLaHLTsCbv

This year’s All-Star Game was special because putting the game’s greatest together in one room has never happened before. It was as if the entire basketball encyclopedia came to life, put on an NBA 75 jacket, and was called one by one.

Michael Jordan was the last name called and it wasn’t because he was late to the event. It’s because Michael Jordan is, simply put, the biggest name in basketball.

Jordan will forever be that dominating presence, that alpha male, that god-like figure who can take control of a room. Even if that room is one that’s filled by both his old rivals and new legends who he influenced in one way or another.

Just look at him. Look at his eyes as he poked fun at an unimpeachable icon like Magic Johnson. Jordan is still that dude. Forever.

Jordan and Vanessa Bryant also shared a brief, special moment at halftime of the All-Star Game.

Vanessa’s late husband Kobe and Jordan had their share of epic battles at the All-Star Game and it just warms the heart to know that the loudest cheers went to Kobe and Jordan.

Speaking of epic battles, Jordan and Dennis Rodman had some of those too. Rodman was–and always will be–the most colorful character in The Last Dance and beyond, and it looks like there’s still no slowing him down.

The sunglasses, the nose rings, the funky outfit—it’s all still there. This is what makes the interaction between Jordan and Rodman such a joy to watch.

Jordan running up to Luka Doncic to give him a hug is another example of the GOAT’s influence, spanning across generations. Doncic wasn’t even born yet when Jordan was collecting titles in the ‘90s. Yet there they were, giving each other the respect they both deserve.

Doncic has that Jordan Brand connection, but every encounter with the boss still leaves him starstruck: “It’s amazing, I don’t know how to explain that moment. It’s just unbelievable. MJ knows my name, it’s a lot. Just an unbelievable moment. I have no words for that.”

What transpired in the final moments of the 2022 All-Star Game was pure Jordanesque. Not unlike what happened in overtime in ‘03, the best player on the court called for the ball at the game’s most important moment. It was Jordan then; it was LeBron James now. With all eyes and smartphones on them, they both made the difficult fadeaway. The only difference now is that James’ shot counted as a game-winner (thank you, Elam Ending).

“It's crazy that the game-winning shot tonight was a fadeaway, and it was inspired by MJ,” James said postgame.

Nineteen years removed from his last All-Star Game, there are still traces of Jordan everywhere.