Jrue Holiday's winning steal and lob in Game 5 will be remembered as one of the most legendary moments in NBA Finals history. 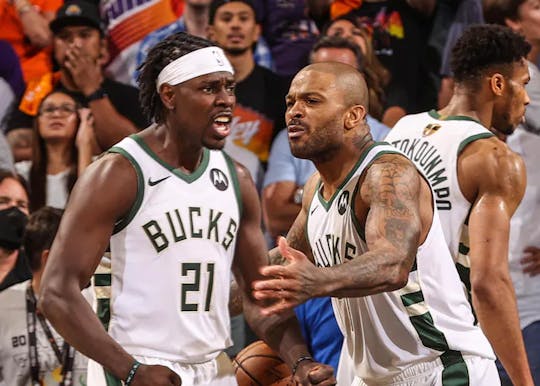 The greatest trick that Jrue Holiday ever pulled was convincing the world he wasn’t good enough.

Holiday was an All-Star once and a member of the All-NBA team never. He won’t make a lot of top 5 point guard lists. You always hear Steph, Dame, Kyrie, CP3, and Trae. Never Jrue.

That’s why when he was brought in to the Milwaukee Bucks—in exchange for depth and the future—to partner with a two-time MVP, there wasn’t a lot of talk. It’s more of “that’s it?”

His move to a title contender wasn’t as earthshaking as, say, the James Harden move or the Anthony Davis move.

In Game 4 of the Finals, Holiday pretty much showed why. He shot horrendously in what was the Bucks’ most important game of the season, missing 16 of his 20 attempts.

It didn’t matter though, because the Bucks still won (thanks, Khris Middleton). The thing about Jrue is that he can affect the game in many ways, not just scoring. But it isn’t good enough. With all the first-round picks given up to get him, Jrue Holiday should be a consistent 20-10 PG with at least one highlight per game.

So in Game 5 of the Finals, that’s exactly what Jrue did.

In a Keyser Soze-type reveal, Jrue corrected his form and unleashed an offensive game that the Suns just couldn’t stop. He attempted the same 20 shots, but this time missing only eight.

In a second quarter where the Suns threatened to run away with the win, Jrue kept the ship steady and turned it around—for himself and, depending on what happens in Game 6, quite possibly for the franchise.

It started with 37-23, Suns. It got to 60-59, Bucks. Jrue did his job on the defensive end by picking Devin Booker’s pocket in broad daylight at one point, then flexed on the other by draining a transition 3.

His line after the game: 27 points, 13 assists, and a highlight that will be talked about forever.

It came at less than 20 seconds left, with a Booker game-winning jumper looming. Book ran into a PJ Tucker and Giannis Antetokounmpo wall, and that’s when it happened.

Jrue was right there when Booker turned for what could’ve been his patented fadeaway. Jrue snatched the ball from and sprinted to the other end, where he could just stand still and maintain the one-point lead. Giannis wasn’t having any of that.

The two-time MVP ran at full speed from the dotted area like he did in that immortal chasedown block in Game 4. Only this time, he wasn’t chasing down a block. He’s chasing down history.

Jrue crossed halfcourt and checked his surroundings. He looked left, then right. Then he looked at the clock. He looked as if he didn’t know exactly what to do.

Until he did. Because when you see Giannis running ahead of you, full head of steam, pointing up, there’s only one thing left to do: throw it up.

Regardless of what happens in Game 6 (or in Game 7), it was a moment that will make us remember why Jrue was brought in to help Giannis and the Bucks get that elusive championship.

The pass was risky, perhaps unnecessary, and a bit over the top. We can say the same about the deal that sent Jrue to Milwaukee, but here we are in a scenario that couldn’t have been scripted any better: the Bucks are heading home for Game 6, one win away from being champions.