Kai Sotto delivered 11 points, including a pair of dunks, two rebounds, one assist, and two steals in nearly 18 minutes of play. 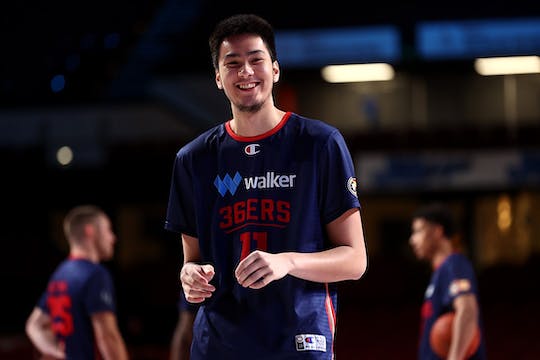 Filipino fans were given a treat on Monday morning as Kai Sotto and the Adelaide 36ers faced off against the Phoenix Suns in a preseason game. The visiting team from Australia stunned the home team, 134-124.

Sotto finished with 11 points on 3-for-6 shooting from the field, including one 3-pointer, two rebounds, one assist, and two steals in nearly 18 minutes of action. He had a pair of dunks and also went a perfect 4-for-4 from the line.

It was definitely a surreal moment watching Sotto play. Here’s a Filipino player, one of our own, playing inside an NBA arena and going up against NBA players.

Sotto ran up and down the Footprint Center in Phoenix. He was banging bodies with Deandre Ayton. He was trying to guard the pick-and-roll against Chris Paul. The youngster stood out on the court with his 7-foot-3 frame as he got rebounds and scored a handful of baskets.

Sotto went undrafted in the recent NBA draft and decided to return to Australia to play for the 36ers. He said he’ll continue to strive and make his NBA dream a reality. Fortunately, his time abroad led him to this very unique opportunity wherein a guest team competed against the Suns in an exhibition game.

It was Sotto’s first real taste of NBA action. It was probably surreal for him too.

It’s easy to criticize, comment, and analyze the 20-year-old’s performance. People online, fans and critics alike, wasted no time making their comments known. As expected, it was a mixture of positive and negative posts.

On one hand, it was dreamlike to watch a player that they watched up close in the Philippines now trying to stay in front of CP3, the Point God himself. But then you can also nitpick his defense or his speed. A dunk on one end would somehow be eclipsed by a defensive lap on the other end later on.

There will be plenty of discussions on whether or not he showed glimpses of what an NBA player should be. Every little detail will be dissected over and over. How did he fare against Ayton? Did he have the foot speed to defend an NBA pick-and-roll? Will his strength hold up against tougher and bigger foes? His shooting form seemed fine, right?

Probably all the talk and criticism is just a small price to pay. After all, he just competed against some of the best players in the world. In the end, the only person Sotto needs to prove something to is himself.

Even though it was just a preseason game, it was a glimpse of what it’s like to watch a Filipino player in the NBA. Whatever emotions and opinions came out from fans were warranted because this is new territory for Filipinos. We’ve never had a player this close to making it to the best basketball league in the world. It’s exhilarating and exciting, and of course, everybody wants more.

Sotto’s NBA dreams may still be a long way to go, but moments like today’s game were a reminder that the dream is still alive.

Extra Pass: Mavericks, Raptors hope to get back on track

The Mavericks and Raptors are both on a two-game slide heading into tomorrow's matchup on NBA TV Philippines.