Kai Sotto aspires to be the first full-blooded Filipino basketball player in the NBA. 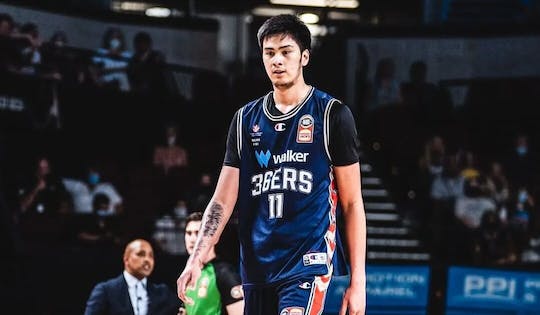 Kai Sotto just wrapped up his season in the NBL (Photo: Adelaide 36ers).

Kai Sotto declared his participation in the 2022 NBA Draft after one season in the Australian National Basketball League.

“I have declared for the 2022 NBA Draft. Please pray for and support me during my quest to fulfill my ultimate dream,” Sotto said in an Instagram post.

In his first professional season with the Adelaide 36ers in the NBL, Sotto averaged 7.5 points, 4.5 rebounds, 0.5 assists, and 0.8 blocks. The 7-foot-3 center recorded a career-high of 21 points in 17 and a half minutes of play against the Brisbane Bullets earlier this month.

The 19-year-old Sotto is gunning to be the first-ever homegrown Filipino to play in the NBA. Currently, there are two Filipino-American players in the league – Jordan Clarkson of the Utah Jazz and Jalen Green of the Houston Rockets.