Kai Sotto gears up for team workouts before 2022 NBA Draft

Kai is putting in serious work as he prepares to showcase his skills to NBA teams heading into the 2022 NBA Draft. 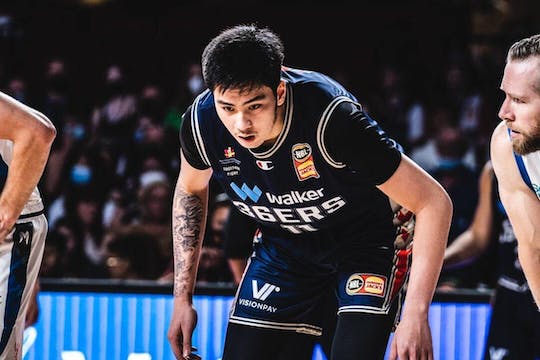 Kai Sotto played one season in Australia before declaring for the 2022 NBA Draft. (Photo from Adelaide 36ers)

The last time Filipino fans saw Kai Sotto, he was rocking rims and swatting shots down in Australia. That’s something he’s always done, even while he was playing amateur ball here in the Philippines. Currently, Kai is getting ready for the 2022 NBA Draft in the U.S. If his training goes as planned, a different Kaiju might emerge from the depths of his hard work.

The first order of business for Team Kai Sotto was selecting a trainer for all of his pre-draft workouts. Kai went back to his old stomping grounds in Atlanta to work with Jeremiah Boswell, his trainer from his former team, The Skill Factory (TSF).

“He’s given me the toughest workouts that’s why I chose to come and train with him. I know that I will be very challenged when I work out with him and I think that will really prepare me for these upcoming NBA team workouts,” said Kai during an exclusive interview with NBA.com Philippines organized by Smart.

Boswell is no stranger to the NBA. He works with the league as part of their Youth Basketball Development team. He knows what young players like Kai need to work on to get to the next level.

“I kinda understand the intensity in which it’s important to get to and so I lean into that with the training that we do,” said Boswell.

Boswell fills out Kai’s week with twice-a-day training, mixes in weight room work thrice a week, all the while honing Kai’s shooting with another coach nearly all week. It’s a full slate because there’s a tight window for Kai before June 13, the deadline for NBA Draft applicants to withdraw.

“He would have the opportunity if he so chooses on June 13th to remove himself from the draft and be in the future draft,” explained Joel Bell, Kai’s agent.

Right now, the entire team’s focus is to get Kai ready for the upcoming individual workouts that he will have with multiple NBA teams. Boswell is making sure that they work on every tiny detail in Kai’s game to be able to fully showcase not only all of Kai’s skills, but his development in the past few weeks as well.

“You see this a lot in the NBA, there’s a lot of small ball, there’s a lot of switching on pick and rolls, and so how does he move laterally? Can he switch on the guards? How does he play the pick and roll? Can he hedge and get back? And so those are some things we’ve been working on and improving just his conditioning and the shooting because in any pre-draft workout you go to with any team, you gotta be able to shoot the ball and you gotta be in great shape,” said Boswell.

Kai’s development as a player also extends to his mental toughness. Being a young player trying to get to the NBA is already difficult enough. Add to that the pressure on Kai as he tries to become the first homegrown Filipino to make it to the NBA. That’s a lot for a 20-year old to carry, but Kai is not your normal 20-year old.

“I think mental toughness comes from preparation. I think if you are well prepared, I think that would really help you as a player to be confident,” Kai shared about his mindset during all these pre-draft preparations in the past few weeks.

Then again, Kai has been preparing longer than a few weeks. He’s been working to get to this point all his life.

The road to becoming an NBA player is long and hard. There’s a lot of work that needs to be done in a short amount of time. While others would shy away from the grind, Kai embraces it. He’s been embracing it all his life. That’s why his team is a hundred percent along with him. They all believe that in the end, it will be all worth it.

“I’ll go back to an analogy I make sometimes, that diamonds are really expensive because they’re rare, so is Kai. And so he’s gonna be a valued commodity,” Bell proudly declared.