Kai Sotto can model his game and NBA journey after these three NBA players. 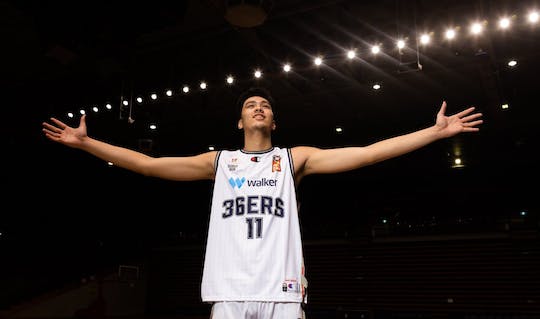 Kai Sotto is looking to make history in the 2022 NBA Draft as the first-ever homegrown Filipino player to get drafted. Just like any other draft prospect, the best way to understand how they’ll translate into the league is by comparing them to an NBA player.

Most player comparisons will focus on the similarities of skills or physical attributes of two players. I will give a slight twist to this pre-draft comparison by also discussing the NBA player’s journey in the league and how applicable it is to Kai.

A player comparison involving Kai Sotto will always start with Kristaps Porzingis. The similarities between the two heading into their respective drafts can’t be ignored.

Porzingis was a 7’3”, 230-pound 19-year-old when he entered the draft in 2015. The only difference between the two is that Kai is a year older and two pounds heavier. Kai’s wingspan measures at 7’5” while Porzingis edges him out slightly at 7’6”. Their height and reach combined with their soft touch make them both tantalizing prospects.

Porzingis was already drawing comparisons to Dirk Nowitzki because his jumper was nearly unblockable and extended all the way out to the 3-point range. He could also get buckets closer to the hoop with a variety of flips, hooks, and faders.

Similarly, Kai has a deep bag of tricks when trying to score in the paint. He has a soft touch just like Porzingis which helps since he can’t overpower a defender in the post yet. He’s shown flashes of an outside shot during his one season in the NBL, hitting 38% of his 3-pointers but at a very low volume. Unlike Porzingis, Kai’s 3-point shot is still a work in progress.

What separates Porzingis from Kai (and a lot of other 7-footers) is his athleticism and mobility. He’s the ideal big man for the two-man game because he can pop out for the jumper but also roll to the hoop. Porzingis can put the ball on the floor, take a couple of dribbles, and drive to the basket. His athleticism and length also make him a lob threat because playmakers can just throw it up, no matter how high, and Porzingis will reach up for it to throw it down hard. There’s a reason why he was called the “Latvian Gangbanger.” It’s because he was always in attack mode on both ends of the floor.

Kai won’t be a top five pick like Porzingis. He’s currently projected to be selected anywhere within the final 20 picks of the draft. Taking a look at second-round selections with a similar profile to Kai, one name jumps out: Bol Bol, the 44th pick in the 2019 Draft.

Bol and Kai have a similar build. Bol stands at 7’2” with a 7’5” wingspan but was only 210 pounds before the draft. He and Kai have similar strengths and weaknesses as well. Both players use their length to get buckets. That’s because their main weakness offensively is they both lack the strength to finish against more physical defenders. Defensively, they’re solid help defenders because their reach and timing allow them to block all kinds of shots at the hoop. Defending out in space can get tricky for Kai and Bol because they both aren’t quick enough laterally to stay in step with their assignments.

Bol is an interesting comparison for Kai because if the mock drafts hold true, Kai will be drafted at around the same range Bol was drafted. He started his career as the third-string center for the Denver Nuggets, spending time with the Chicago Bulls as a two-way player. Just like Kai, he will be treated as a project by the team that drafts him and will be brought along slowly. Kai, like Bol, will most likely be playing behind more established players and will have to get his reps in the G League.

Bol’s best stretch as a player came during the 2020 NBA Bubble scrimmage games where he showcased his full array of skills on both ends of the floor. Unfortunately, that’s been the peak of his NBA career so far. In three seasons in the league, Bol has shown flashes of brilliance. But it’s been just that. Flashes. He hasn’t been able to create a real role with the Nuggets and the team gave up on their project, shipping him away via trade last season.

If Bol serves as a cautionary tale for Kai, then Yuta Watanabe can be the inspirational story he can look up to.

Watanabe went undrafted in the 2018 Draft. The main knock on him was his lack of strength for his position. Instead of letting that deter him, he took the longer route to the NBA. He played well enough in the Summer League to earn a two-way contract with the Memphis Grizzlies. He had explosive games for the Memphis Hustle but more importantly, contributed to the Grizzlies whenever he was called up.

In 2020, Watanabe signed a two-way deal with the Raptors. He never played for their G League affiliate because he earned a bench role under coach Nick Nurse. His two-way contract was eventually converted into a full contract with Toronto.

The way Watanabe stuck around in the league despite being undrafted is something Kai should study closely. Watanabe made an impact with each team he played on by focusing on defense. Although they play different positions, Kai can have a similar impact on the defensive end as Watanabe. Rather than try to do it all on the court, Kai can focus on maximizing his minutes by being a shot-blocking specialist. If he can do that while still being able to dominate in G League games, then Kai can also earn a solid role with an NBA team just like Watanabe.

These player comparisons not only show who Kai can model his game after but also whose footsteps he can follow depending on how the 2022 NBA Draft goes. While getting drafted is an honor, being able to play and stay in the league is more important.