The Nets' star forward will be playing for the first time since mid-February. 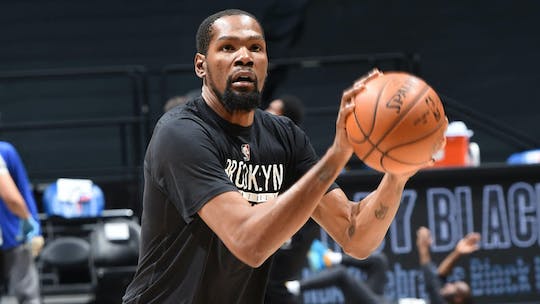 The Brooklyn Nets will have one of their All-Stars back in the mix even as another one rests.

Kevin Durant is listed as available to play for tonight’s game against the New Orleans Pelicans, the team announced today. Durant has not played since Feb. 13 because of a strained left hamstring.

In a video released by the team on Twitter, Durant talked about his work to rehabilitate form his injury and being ready to play.

“The last month or so, it’s just been me working out every day, playing here and there with my teammates,” Durant said. “Mainly just working out and just trying to stay ready, keeping my stamina up and sharpening up my skills so I can transition back smoothly.

“It’s good to get a few of those sessions in before I went and jump into an NBA game. It’s been too long for me … I’m just excited to get back out there.”

The Nets have only had their star trio of Durant, James Harden and Kyrie Irving in the same lineup for seven games (5-2) this season, but are currently No. 2 in the Eastern Conference at 35-16. Durant is averaging 29.0 ppg, 7.3 rpg and 5.9 apg for the Nets this season.

Harden will be reevaluated in approximately 10 days after an MRI revealed a strained right hamstring, the team announced on Tuesday.

Harden originally sustained the injury on March 31 against the Houston Rockets but appeared to reaggravate the hamstring in his return against the New York Knicks on Monday.

He lasted just four minutes before having to exit the contest.