Durant did not need to suit up for Team USA to cement his basketball legacy, but he continues to play because he loves the sport, and has made Olympic history in the process. 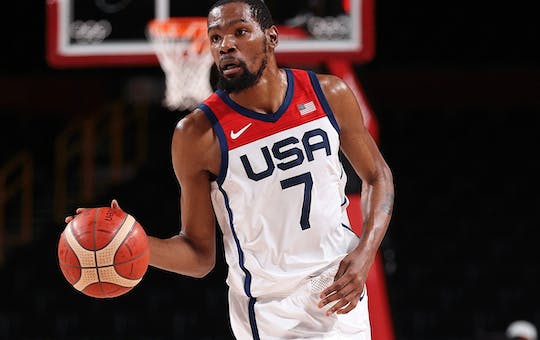 The Americans, as has become their habit during the entire Olympic cycle, started slow and needed to be bailed out. The Czechs quickly took a 10-point lead and held a seven-point advantage after the first quarter. Team USA only woke up in the second quarter. Behind Durant, Team USA rallied.

Durant, jogging up the court with the ball while simultaneously stalking his Czech defender, unleashed a familiar move – his hesitation-pull-up jumper hybrid that cements defenders to the ground while he lofts a jumper in one motion.

Durant, in that signature fluid motion, drilled the 3-pointer that made him Team USA's all-time leading scorer in Olympic men's basketball. He passed Carmelo Anthony and is behind women's basketball greats Lisa Leslie and Diana Taurasi all-time in Team USA Olympic history.

With the background of an empty arena in Tokyo, the moment could have felt barren, were it not for the reverence KD holds for basketball history. He's etched his own corner in it, but he still obviously derives joy from it that he even splashed another triple in the next possession.

Durant finished with 23 points on 8-for-11 shooting with eight rebounds and six assists. The Americans were able to blow the game wide open in the third quarter that Durant didn't have to play in the final period. He spent most of the time yelling at former NBA player Jan Vesely from the opposing team and taking in the Olympics vibes.

“This guy next to me will be the next one,” Durant told reporters when asked about his thoughts on setting the record. He was referring to 22-year old first-time Olympian Jayson Tatum.

Kevin Durant has been an easy target for criticism – some deserved, some not – for his past choices. The Olympics this year show a side of him that barely gets praised: he genuinely just loves to play basketball.

Durant had every excuse not to play for Team USA. This past NBA season was his first since a devastating Achilles injury that kept him out for the entire 2019-2020 season. He had several other injuries during the season that he needed to mend. In his final three playoff games for Brooklyn, KD played all but eight of 146 minutes as he valiantly tried to single-handedly conquer eventual champions Milwaukee Bucks.

No one would blame him if he sat out the Olympics, as no one batted an eye when other superstars begged off from the squad. For some reason, not even a month after getting bounced by the Bucks, Durant was back training with Team USA. Again, he just loves to play basketball.

Hopefully, that is what an Olympic gold this year would do for his legacy – for people to see that most of the time, he just plays basketball because it’s fun. He enjoys being around peers and suiting up on the game's biggest stages.

Realistically, a gold medal won't move the needle for the way he's talked about. He's already immortal. He didn’t need to do this, but Team USA needs him to be a lights-out superstar against the world’s best squads. Without KD, this team might not even have a chance.

No matter what happens next for Team USA, the discourse around KD should shift. We have a guy that went to the Olympics just because he loves basketball that much.