Brooklyn's star forward suffered the injury during the 2nd quarter against New Orleans on Saturday. 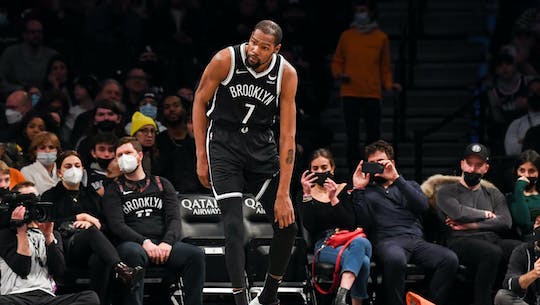 Brooklyn Nets superstar Kevin Durant was diagnosed with a sprained medial collateral ligament in his left knee, the team announced on Sunday. He is out indefinitely.

Durant suffered the injury against the New Orleans Pelicans on Saturday after a collision with 5:38 remaining in the second quarter. The Nets announced at halftime that he wouldn’t return. He had 12 points in 12 minutes.

Durant was hurt when teammate Bruce Brown bumped into a driving Herbert Jones and fell backward into him. Durant grabbed at his knee, tried to walk it off and then asked to be removed from the game. He was walking with a limp when he left the arena in the fourth quarter.

According to ESPN’s Adrian Wojnarowski, there’s “optimism” it will be a 4-to-6 week rehabilitation for Durant.

Durant was back in the lineup after sitting out a loss to Oklahoma City on Thursday night to rest on the second night of a back-to-back. It was the Nets’ fourth game in five nights.

With Kyrie Irving ineligible to play in home games, Durant has had to play heavy minutes in his second season in Brooklyn after sitting out a year following Achilles tendon surgery.

The 11-time All-Star is enjoying an MVP-caliber season in Brooklyn, averaging a league-leading 29.7 points, 7.5 rebounds and 5.9 assists while shooting 52% from the field.

The Nets have only just seen Kyrie Irving return on a part-time, road-only basis due to New York’s existing COVID-19 vaccine mandate. James Harden has also rounded into form following a slow start, averaging 27.2 points, 8.3 rebounds and 10.6 assists since Christmas.

Brooklyn entered Saturday’s games in third place in the Eastern Conference, just two back in the loss column from first-place Chicago. It starts a four-game road trip Monday in Cleveland to begin a stretch where it plays nine of 11 games on the road.