Durant leaves it all on the court for the Nets

Kevin Durant gave his everything in a grueling seven-game series against the Bucks, but the Nets' title hopes still flamed out. 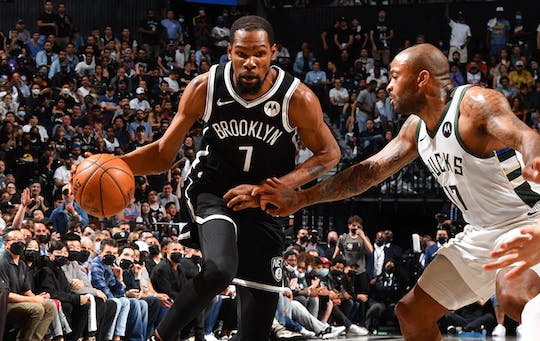 Basketball is equally beautiful as it is cruel.

More than any other team, this year's Brooklyn Nets exposed the risk that comes with building a superteam. Any logical team would jump at the chance of adding Kevin Durant, Kyrie Irving, and James Harden to their roster.

The Nets drew two historic games from Durant in the semifinals, including a legendary shot to send Game 7 to overtime, and still got bounced from the playoffs.

At the time of the Harden trade early this season, experts already predicted that the Nets will have the single most explosive offense in the history of the league. While they didn't quite reach that level in the regular season due to injuries, they looked every bit as deadly in their first round trouncing of the Boston Celtics.

The first wheel came off in their series opener against the Bucks, when just 43 seconds into Game 1, Harden suffered what would later on be revealed a Grade 2 right hamstring strain. Still, the Nets with their original duo of Irving and Durant dominated the Bucks in the first two games and were a turnover or Durant triple away from taking Game 3 in Milwaukee.

The second wheel fell off in Game 4 when Irving went down just before halftime, suffering a high-ankle sprain that would keep him out for the rest of the series. At this point, with the Bucks tying the series at 2-2 without two of their best players, the Nets could have crumbled.

In bringing together three of the most talented players in the league, the Nets committed 80 percent of their total salary to three players, leaving barely any room for supplemental talent. Every superteam ever built has been this way – as volatile as they are powerful. One injury dramatically shifted the Nets’ title hopes. With Harden and Irving down, the Nets’ next best player became a past-his-prime Blake Griffin.


It was the ending scene to a bittersweet movie. After doing everything he could to keep the Nets in the series, the hero had nothing left to give. Durant tried, but his legs gave out more and more as he took more shots. His final shot, a 3-pointer that missed the entirety of the rim, was proof that he really gave everything on the court.

The biggest losers of the Nets’ injuries are basketball fans. While we did witness the ascension of KD, we could have experienced something more.

Unfortunately for Brooklyn, the NBA doesn't give out trophies for building a championship team. You have to win four grueling series to get any glory.