Gentry will serve as interim coach for the Kings following Walton's departure from Sacramento after two-plus seasons as coach, the team announced Sunday. 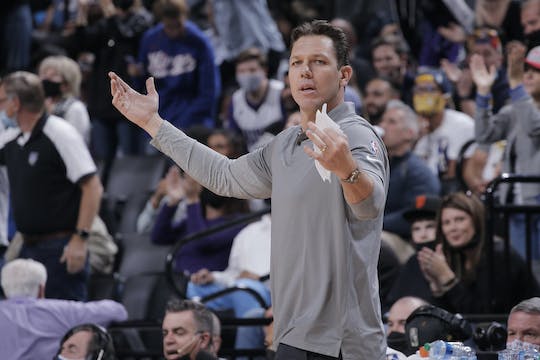 The Sacramento Kings have fired coach Luke Walton and named Alvin Gentry interim coach, the team announced Sunday. Walton posted 31-41 records in each of his first two seasons but was unable to take a step forward this year and was fired after losing seven of the past eight games.

“After a thorough evaluation of the season thus far, I decided to make a change to the head coach position,” said Kings General Manager Monte McNair. “I want to thank Luke for his efforts and contributions to our team.”

Gentry brings more than 35 years of experience to the Sacramento bench. Prior to the Kings, Gentry most recently served as head coach for the New Orleans Pelicans (2015-20). The Kings play at home on Monday against the 76ers (10 ET, NBA TV).

Walton had a 68-93 record in two-plus seasons as coach, failing to get Sacramento back to the playoffs for the first time since the 2005-06 season. The Kings ranked near the bottom of the league in several defensive statistics under Walton’s leadership, including scoring and shooting percentage.

Sacramento has tried to build a core around recent lottery picks like De’Aaron Fox, Tyrese Haliburton and Davion Mitchell.

But the biggest mistake came the year before Walton arrived when Sacramento took Marvin Bagley III second overall, ahead of both Luka Doncic and Trae Young. Bagley has played in only four games this season as he has fallen out of favor.

The Kings have been at the bottom of the league for years, with their current 15-year stretch without a playoff berth tied for the longest in NBA history with the Clippers franchise, which missed the playoffs from 1977-91 while playing in Buffalo, San Diego and Los Angeles.

The situation in Sacramento has been so bad that Walton’s .422 winning percentage with the team is the second best of the 18 coaches since the franchise moved to California in 1985.

Walton, a second-round pick in the 2003 Draft, played 10 years in the NBA before turning to coaching. He was hired by the Golden State Warriors as an assistant in 2014. He served as the Warriors interim head coach at the start of the 2015-16 season where he led the team to a 19-0 start while coach Steve Kerr recovered from offseason back surgery.

After the 2016 NBA Finals, Walton was hired by the Los Angeles Lakers where he would eventually be paired up with superstar LeBron James in the 2018-19 season but was fired after going 37-45 and missing the playoffs.

Information from the Associated Press was used in this story.