The former role players on the Lakers' 2020 title team have 'no hard feelings' about being included in last year's Russell Westbrook deal. 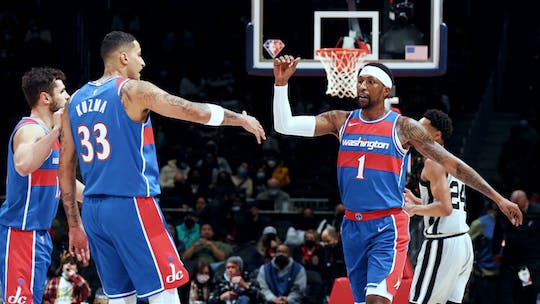 LOS ANGELES — Shortly after they touched down in this city, Kyle Kuzma and Kentavious Caldwell-Pope soon remembered what they loved about living here for significant parts of their NBA career.

Once he stepped off the team plane, Caldwell-Pope basked in the sunny skies and 75-degree weather. Shortly afterwards, Kuzma returned to his home here where he could both enjoy meals that his personal chef prepared and sleep in his own bed.

Safe to say that both Kuzma and Caldwell-Pope have attached special significance to the Washington Wizards’ four-day trip here. Two days after the Wizards finished a 115-109 loss to the LA Clippers on Wednesday, they will face the Los Angeles Lakers on Friday (10:30 pm ET, NBA TV) in what marks the first game against their former team. Both Kuzma and Caldwell-Pope are less than a year removed from the Lakers dealing them in a comprehensive trade package to land Russell Westbrook, which came only a season after helping the Lakers win the 2020 NBA title as key role players.

No wonder Kuzma described the Wizards’ trip to L.A. as “exciting times” after the Lakers selected him with their No. 27 pick in the 2017 NBA Draft before spending the next four seasons as a valued role player. No wonder Caldwell-Pope conceded Friday’s game will have “some extra juice” after the Lakers signed him as a free agent in 2017 before spending the next four years as a dependable shooter and defender.

But as Kuzma and Caldwell-Pope reflected on their Lakers’ past and their Wizards’ present, they abstained from expressing any bitterness with how their time there ended.

Therefore, it would be a stretch to suggest Kuzma and Caldwell-Pope have become consumed with exacting revenge on their former team.

Both teams already have more important things at stake. For the remainder of the regular season, both the Wizards (29-35; 11th in Eastern Conference) and the Lakers (28-37, ninth in Western Conference) will fight for a spot in the NBA’s Play-In Tournament. That backdrop explained why Kuzma said “we have to win that game.”

The Lakers hardly feel the same way about themselves. They have not become the NBA championship contender they envisioned when they acquired Westbrook. They hoped the nine-time All-Star could give the Lakers additional scoring and playmaking depth, while relieving the burden for LeBron James and Anthony Davis. Not only has that not happened amid the Lakers suffering overlapping injuries to their stars and role players. Though Westbrook has played all but one game, he has struggled establishing his footing as either the Lakers’ third, second or first option.

Meanwhile, the Lakers have lacked the needed offensive and defensive depth that Kuzma and Caldwell-Pope provided. The Wizards cannot exactly run a victory lap just yet, though. Following a 10-3 start, the Wizards have plummeted toward the bottom of the Eastern Conference. They entered Wednesday’s game against the Clippers with players missing a combined 155 games due to injuries.

Wizards star guard Bradley Beal has missed 24 games and counting amid having season-ending surgery on his left wrist. And who knows if the Wizards will benefit long term from acquiring forward Kristaps Porzingis and a second-round Draft pick from the Dallas Mavericks before the trade deadline for Spencer Dinwiddie and Davis Bertans.

The Wizards have mostly benefitted from the Westbrook trade. After Montrezl Harrell spent half the season providing consistent secondary scoring, the Wizards flipped him before the trade deadline to Charlotte for point guard Ish Smith and center Vernon Carey Jr. The Wizards have also become pleased with Kuzma and Caldwell-Pope.

“You think you have a sense of guys when you play them all the time,” Wizards coach Wes Unseld Jr said. “But they’re in a different role.”

Kuzma has experienced the most dramatic role shift.

He spent his first two NBA seasons as a significant part of the Lakers’ young roster both before and during James’ arrival. After enjoying mostly a starting role his second season, Kuzma then handled a bench reserve in his third and fourth season because of Davis’ presence. Without James and Davis on the team depth chart, Kuzma has enjoyed an expanded role. Kuzma has posted a team-leading 24 double doubles and remains on pace to set a career high in rebounds (8.7) and assists (3.4).

“The team and organization really lean on me,” Kuzma said. “Everyone respects my basketball acumen here with being able to win a championship and to have winning habits. People respect that. On top of that, everybody believes in me. They really allow me to be myself. They want me to impact the game by doing it all. Having that confidence from everybody makes it easier for me.”

With Kuzma admittedly feeling more comfortable, Unseld said he has become “pleasantly surprised” with Kuzma’s refined rebounding and playmaking. Should he maintain that play, Kuzma expressed optimism he could become an All-Star in future seasons so long as the Wizards improve their record. Though Unseld called on Kuzma to reduce his turnovers (a career-high 2.5), the Wizards coach did not bat an eye over Kuzma’s All-Star aspirations.

“I don’t think he’s far off, honestly,” Unseld Jr. said. “The level of consistency has been there. We’ve seen him play at a high level.”

The Wizards hardly have the same expectations for Caldwell-Pope. He simply has a different job description as a starter for most of his nine-year NBA career. Yet, Unseld Jr. reported that Caldwell-Pope has played “exactly what I expected” with dependable perimeter defense and outside shooting (39.4%).

“I came right over and fit right in,” Caldwell-Pope said. “I feel like the organization made it easy for when we got traded. Everyone was friendly. We tried to get to know each other. It exceeded my expectations.”

Kuzma and Caldwell-Pope partly have their Lakers’ experience to thank for that.

Kuzma expressed appreciation for playing with James and Davis because of their obvious credentials. Kuzma added he valued the importance with mastering “the little things” so he could adapt to varying roles. Under that same environment, Caldwell-Pope learned to become more outspoken.

Not a surprise then that Unseld has credited both Kuzma and Caldwell-Pope for assuming leadership positions. In Kuzma’s case, he made two 3-pointers in the final 26 seconds in a win in Cleveland after enjoying what he called “a little banter” with Cavaliers fans. After seeing a fan sign that read, “LeBron won Kuzma his ring,” Kuzma retorted that “without LeBron, Cleveland wouldn’t be s—.”

Kuzma made a game-winning shot in Detroit that he considered “a big-time moment” because he grew up in Flint, Mich. And following Wednesday’s loss to the Clippers, Kuzma blamed himself for the team’s fourth-quarter offensive execution.

“There is nothing that we have been through this year that they haven’t experienced at a high level,” Unseld Jr. said. “In those tight games, Pope and Kuz have both made big plays for us on both ends. So, there’s that degree of comfort knowing those guys are out there and they’ll respond correctly in that moment because they’ve lived through it.”

A ‘time to move on’ for ex-Lakers

Unlike during their Lakers tenure, neither Kuzma nor Caldwell-Pope lived through trade rumors this season.

“Every single year with the Lakers, I was in trade talks,” Caldwell-Pope said. “Some of it was true. Some of it wasn’t.”

The Lakers avoided including Kuzma and Caldwell-Pope in 2017 when they dealt Larry Nance Jr. and Jordan Clarkson to Cleveland for Isaiah Thomas, Channing Frye and a first-round draft pick, while also freeing up cap space for future deals. The Lakers had considered including Kuzma and Caldwell-Pope in trade packages to New Orleans for Davis both before the 2018 trade deadline and subsequent offseason before deciding otherwise. Last summer turned out differently.

The Lakers initially sought to acquire Buddy Hield from the Sacramento Kings for Kuzma and Harrell. The Lakers then pivoted to the Westbrook trade after James and Davis voiced their hopes to the front office.

Both Kuzma and Caldwell-Pope believe the move benefitted them, too.

“I felt like it was a great opportunity that it was going to happen because of who they were getting,” Caldwell-Pope said. “So, I figured it would happen. Then it did. I was right. I didn’t think too much of it. I guess it was time for me to move on.”

Since then, Kuzma and Caldwell-Pope maintained it has not been hard to do so. They have thrived with expanded roles. They have escaped the intense glare that comes with both playing for the Lakers and playing as James’ teammate. And they still plan to enjoy this city’s perks this week and in future offseasons.

When Kuzma and Caldwell-Pope meet their former team for the first time, expect them to reflect with nostalgia before becoming eager to put on a strong performance. But both stressed they hardly hold any resentment against a storied franchise where they won an NBA title.

“I’m built different as a person with the way I grew up and I handle criticism really well,” Kuzma said. “I don’t let things bother me. I keep my head up. I want to get better. I like to be challenged. That’s why it’s easier for me than others.”

The views on this page do not necessarily reflect the views of the NBA, its clubs or Turner Broadcasting.??