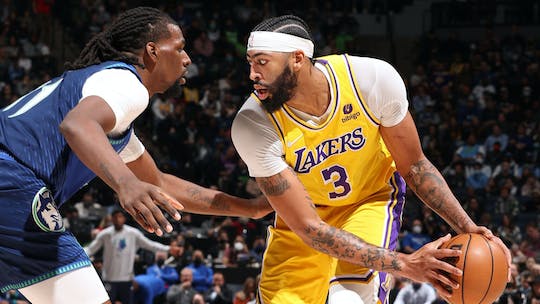 Coach Frank Vogel said Davis would get an MRI exam on Sunday. He had just nine points and one rebound in 20 minutes of the 110-92 loss to the Timberwolves.

Late in the first quarter, Davis landed on the leg of Minnesota’s Naz Reid and fell to the floor in obvious pain while clutching his right ankle. Davis was able to walk gingerly off on his own into the locker room for further examination. He had six points in 11 minutes before getting hurt.

Late in the second quarter, Davis jogged back to the bench and re-entered the game. But midway through the third quarter, the eight-time All-Star center collided with Minnesota’s Jaden McDaniels and couldn’t put weight on his left knee. He left the floor again, this time for the rest of the night.

Sources told ESPN’s Dave McMenamin that “so far all is in good structure” with Davis’ knee injury.

Davis missed two games last week with left knee soreness. He returned on Wednesday at Dallas with 20 points and 12 rebounds.

The Lakers were already shorthanded with major COVID-19 issues. They had six players in the NBA’s health and safety protocols, and Trevor Ariza also remained unavailable due to injury.