The Lakers' new center is ready to return to the lineup after missing the last four games. 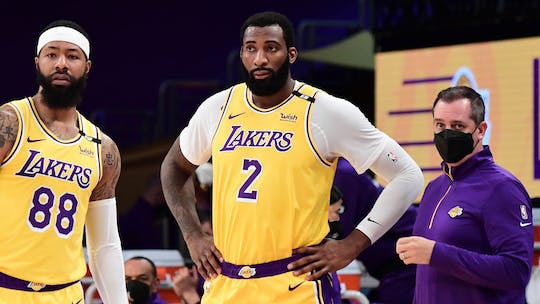 Newly added Los Angeles Lakers center Andre Drummond will be back in the mix today against the Miami Heat after missing the team’s last four games with a toe injury.

Lakers coach Frank Vogel said on Friday (PHT) that Drummond — whom the Lakers added as a free agent on March 29 — will return to the lineup. Vogel said after the Lakers beat the Toronto Raptors on Wednesday that Drummond would start once he was cleared to play again.

Drummond had an abbreviated debut on last Thursday against Milwaukee, and the right big toe contusion he suffered delayed his ability to play since then.

Drummond scored four points in 14 minutes before leaving the court early in the third quarter after trying to play without the toenail on his big right toe.

He started for the Lakers in his first NBA game in 6 1/2 weeks, but he wasn’t on the floor to start the second half while getting treatment on his toe. He checked in and made it through just a few more possessions before taking himself out of the game in clear pain.

The Lakers signed Drummond last weekend after 8 1/2 NBA seasons in Detroit and Cleveland.

Additionally, forward Kyle Kuzma (calf tightness) is listed as questionable against the Heat while new swingman Ben McLemore will be available to play against Miami. However, McLemore’s minutes in tonight’s game will depend on the availability of the Lakers’ other wing players.

The Lakers are 32-19 and fifth in the Western Conference and have been trying to stay afloat in the standings while superstars Anthony Davis and LeBron James recover from injury. Davis has not played since Feb. 14 because of an Achilles injury, while James (ankle) has been out since March 21.