Lakers' new star trio could be unstoppable ... or combustible 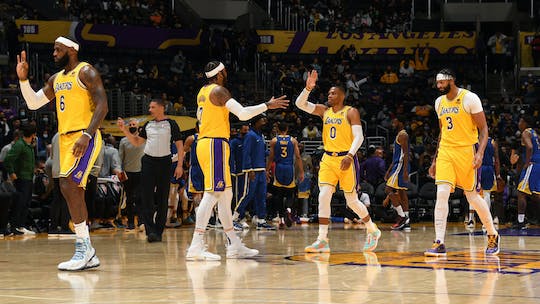 Not that any of the highlight reels and blunders mattered that much. Their first game together coincided with the Lakers’ 111-99 preseason loss to the Golden State Warriors on Tuesday at Staples Center. Never do NBA championship teams look the same in October as they do in June. Never do their opponents for that matter considering the Warriors rested stars Stephen Curry and Draymond Green.

“We’re being patient with the process and understanding we’re going to have frustrating moments,” James said. “We’re going to have moments where we’re not quite there and we’re taking a step backwards. Nothing is worth having if it’s not worth working for.”

Still, it only takes one game to reveal that James, Davis and Westbrook showcase plenty of strengths and flaws.

Westbrook connected to James on fast-breaks. Westbrook set up Davis for easy baskets. And Westbrook himself showed an ability both to attack in transition and pass up that opportunity to a more open teammate. With those qualities, the Lakers’ trio played a large point in fueling the team’s 15-6 run to open the first 4:06 of the third quarter.

“We saw some great things with Me, Bron and Russ in actions,” Davis said.

Westbrook did not even score until midway through the second quarter. Following the Lakers’ double-digit run to open the second half, the Warriors went on a 21-3 tear with all three of those stars on the floor.

How long will it take for the Lakers’ stars to figure out how to run their engine properly?

The Lakers have one more preseason game in Sacramento on Thursday (10 p.m ET, NBA TV) before their actual season opener next week. Then, the Lakers will play a Warriors team that will feature Curry’s long-range shooting skills and Green’s defensive intensity. After that, the Lakers then face the Phoenix Suns, which dropped L.A. in the first round of the playoffs en route to a Finals berth in 2021.

Even through those tough early games, it might be a stretch to envision the Lakers laboring a 1-4 start as they did in the 2012-13 season. The Lakers then have winnable games against rebuilding teams, including in San Antonio (Oct. 26), in Oklahoma City (Oct. 27) and a three-game homestand against Cleveland (Oct. 29) and Houston (Oct. 31, Nov. 2).

Being winless through five exhibition games puts L.A. on pace to mirror the 2012-13 team — which tried to integrate new stars (Dwight Howard, Steve Nash) with familiar ones (Kobe Bryant, Pau Gasol) — that finished 0-8 in the preseason.

“It could take all year to really be at our best,” Lakers coach Frank Vogel said before the game. “Ideally, that’s when we are at our best going into the playoffs. But we have the mindset to hit the ground running and come out of the gates really strong and things clicking as best as we can.”

The Lakers sure hit the ground running once the game started, but that led to some over-eagerness.

The first play ended with Carmelo Anthony taking a 3-pointer with just one second left on the shot clock that earned him a trip to the free-throw line. After making those foul shots, the next two plays ended in Anthony misses. Following a Davis block, Westbrook and James committed turnovers on consecutive possessions. But nearly two minutes later, James scored six points in a 30-second span thanks to the Lakers’ defense and Westbrook’s playmaking.

The Lakers remain intent on ensuring the trio’s on-court time features more home runs than errors, obviously. They also conceded that what they showed in exhibition play will actually mirror what happens in the regular season. To ride the Lakers’ roller coaster, experiencing the frustrating miscues might become the cost of admission in exchange for experience the exhilarating highs.

“It’s reasonable to think there are going to be some bumpy nights early in the season,” Vogel said. “But we had that expectation coming in two years ago, and we jumped out of the gates pretty strong. So that’s what we’re hoping for.”

Yet, the Lakers’ circumstances two seasons ago contrast sharply to their present.

No doubt, the Lakers experienced plenty of adversity that season. They had a disrupted training camp in China. They experienced tragedy in Kobe and Gianna Bryant’s death. They stopped a season during a global pandemic and then resumed the season three months later in a campus bubble to win the NBA title.

But as far as the X’s and O’s challenges? Then, the Lakers had to figure out how James and Davis would integrate together with a new coach and eight new role players. But the Lakers soon found out that James and Davis complemented each other perfectly. James lived up to his vow that Davis would become the offensive focal point while Davis deferred to James to run the offense.

This season? The Lakers have to figure out how James and Westbrook will share ball handling duties, how fast they will play and how often they will look for Davis, other teammates or themselves.

“Me as a leader, my only job is to prevent myself from getting frustrated,” James said. “If I don’t get frustrated, I think it will trickle down to everyone else. I’ve never been a person that’s okay with not being excellent. But I understand things take time as well. As long as I keep the main thing the main thing and stay even keel with whatever is going on with our ball club, we’ll be fine.”

So just like that past two seasons, the Lakers plan to lean heavily on James and Davis to accentuate their strengths and cover up their flaws. As much as the Lakers want to accelerate chemistry with Westbrook, they have also staggered James and Davis away from him. That way, James can still run the point and score in isolation and Davis can still receive lobs from veteran guard Rajon Rondo (whom the Lakers have credited for being vocal in practice, film sessions and coaches meetings).

“That’s going to be the case for all of our news guys; not just Russ,” Vogel said of James and Davis. “They’re most familiar with our system and each other. They’ll carry the load in that regard, but we need everybody to hit the ground running.”

All of which highlights the conundrum that all quickly assembled star teams face.

Therefore, the Lakers are unlikely to repeat the 2012-13 nightmare that entailed Bryant, Howard, Gasol and Nash all having varying disagreements on how to blend their talents together. These Lakers have talked about bonding tightly during an informal camp in Las Vegas, film sessions and group texts. But it might be stretch to find inspiration from other championship caliber teams.

Although Kerr conceded the Warriors and Kevin Durant experienced a learning curve during their first season together in the 2016-17 season, the Warriors soon won consecutive NBA titles because of how well Durant blending his scoring with Curry and Klay Thompson. As for James, he certainly has perspective on how he worked with Miami’s Dwyane Wade and Chris Bosh as well as Cleveland’s Kyrie Irving and Kevin Love. But Miami and Cleveland did not win an NBA title until losing in The Finals first. The Lakers may not have that luxury this season to be as patient.

“Every challenge is different. Every year is different,” James said. “I can’t base any previous team or any previous situation to this year. This year is about how much work we can put in and how much desire we have to get better and better.”

And this year is also about how much James, Davis and Westbrook can blend their talent together. It could be both beautiful and ugly to watch.