Rookie of the Year LaMelo Ball captivated the league with his incredible passing skills and high basketball IQ. 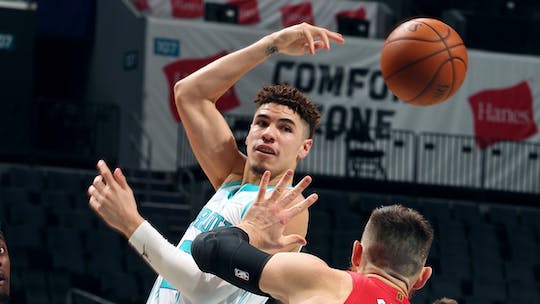 Every so often, a special player takes over a specific part of the game and makes it their own.

There's Steph Curry and, of course, his mastery of the 3-point shot. Curry has become such a three-point savant that his relationship with it should be made a four-year college course, a dual study in art and science. Saying he has made the 3-point shot an art form is an understatement; he made it its own culture.

There’s LeBron James and his uncanny ability to chase down a fleeing offensive player, full head of steam, only to glide at the last possible second and perfectly time a block. He’s victimized so many, it’s become a cautionary tale for the foolishly reckless.

Then there’s James Harden and his affair with the stepback 3. What Harden does is he dazzles you with an array of dribble moves and crossovers before he time travels to the future, to a time when the stepback 3 is as normalized as a layup. A basketball wasn’t designed to be dribbled like that, but here Harden is disrupting that. It’s discourteous and downright offensive to those defending it.

Sure, many others before him have chosen the path of passing as the means to reaching greatness, the Magic Johnsons and the John Stocktons of the world. The league’s newly named MVP, Nikola Jokic, took on passing, reshaped it a bit to fit his 7-foot frame, and rebranded it as his own.

Chris Paul, the only active player with 10,000-plus assists, looks to passing as his go-to killer weapon when all else fails. CP3 is a volume passer, and he takes command of a game by making, almost perpetually, the correct pass.

With LaMelo, passing becomes in itself both a risky yet courageous act. As if moving the ball in the craziest, boldest way possible is his only true calling. While his peers come into the league bucket-ready and embodying ice-in-their-veins mentality, LaMelo is on a different wave. He has a passion for court vision. He’s an advocate of sharing. When he’s on the floor with the ball in his hand, he’s always the last to eat.

LaMelo’s unusual path to the NBA—via a pro league in Australia—was surprising and unexpected, like the unusual path of his no-look dimes and one-handed full-court dishes. He always finds the weird angles at the littlest of spaces. It’s a gift, really, given to a blessed few.

A lot of baggage came with LaMelo (most of which latched on to his last name) when he came into the league, with a lot of words, usually not for praise, thrown at him for even trying. Yet the very first moment he stepped on an NBA court, on December 13, 2020, to be exact, all of the noise toned down and was remixed to a groovy chorus of “oohs” and “aahs.”

There was one play with LaMelo leading a 3-on-3 fastbreak. One teammate was ahead on his left and the other on his right, and LaMelo threw a no-look, behind-the-back pass to the teammate on the left. Words can’t even do it justice.

Here’s one more attempt: LaMelo led the fastbreak and looked straight ahead, his body not even twisting a tiny bit, his pace not changing ever slightly, but somehow the ball ended up to his teammate on the left for an and-1. The defense simply had no chance. Ooh.

There was another play, with LaMelo catching the inbounds pass at the backcourt, then in one motion threw a full-court, one-handed pass to a streaking teammate for a layup at the opposite end. Aah.

There are many more plays like these throughout the season, where LaMelo can flex not only his generosity and willingness to pass on the fly, but also his extremely high basketball IQ. The way he can deliver the ball from here to there with such precision is an awesome thing to watch.

Forget the numbers, just watch a full game of LaMelo with the Charlotte Hornets and get mesmerized by how he has pretty much solved the passing game.

The Hornets were only two wins away from making it to the playoffs this season. Their future looks promising if they keep giving LaMelo the ball and trust that it will, in a crazy way, somehow end up in the right place. He’ll get even better and wiser, that’s the scary part about it.

He’s just a rookie, by the way. The best in his class.