Three intriguing prospects who teams could select late in the NBA Draft. 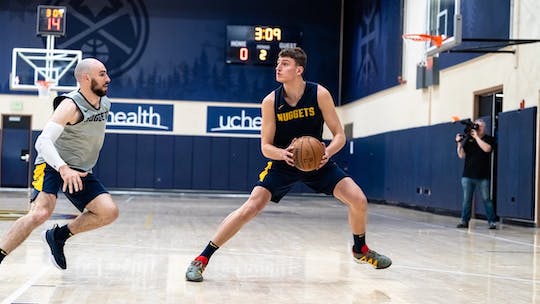 The 2022 NBA Draft is being billed as one of the more perplexing classes.

There are some game-changing, franchise-altering players at the top of the draft. From the middle to the bottom, it's more of a mixed bag. It's anyone's guess which of the late-round prospects pan out.

Here, we take a swing at placing three of the more intriguing prospects of this draft batch. Is there a Kyle Kuzma out there? Or do we have a lot of Usman Garubas?

The dude with the incredibly similar name a.k.a the Serbian Michael B. Jordan is an intriguing player.

Nikola Jovic is a skilled 6-foot-11 prospect that can genuinely play forward on the next level. His main strength is his playmaking; he's a guard that experienced a late growth spurt, so he's retained plenty of the ball-handling and passing skills he developed.

He has a great feel for finding the best pass in situations that occur frequently in the NBA. He knows how to make plays as the roll man in pick-and-rolls. He can run the fastbreak or semi-transition and always makes something happen.

But like many European prospects, Jovic's athleticism is being questioned. Is he going to be fast enough to guard small forwards or even quicker power forwards in the NBA? As of now, he has subpar foot speed and isn’t at all too physical. He also only shot 34 percent from deep with a true shooting percentage of 52.9 percent in the junior Serbian leagues, so he has a long way to go.

Think of Jovic now as a stretched-out Josh Giddey or a very young Boris Diaw. He’s a rare playmaking prospect that just needs to add one or two more layers to his game to flourish on the next level. It’s an easy bet that Jovic eventually figures out an offensive role with his workable jumper, size, and IQ.

He's currently projected to go in the early to mid-20s of the draft. It would be kismet for the Denver Nuggets to draft him with the 21st pick, not just for the hysterical confusion, but it also makes a lot of sense basketball-wise.

Jovic could fill a bench role for them while he gets to develop next to a countryman. The Nuggets have always been patient in incorporating prospects and Jovic fits the profile of players that they’ve swung the fences for.

The true gold in the recent drafts has been finding the players with NBA-ready skills that, for some reason, are getting overlooked for a glaring hole in their game. Call it the Herb Jones effect.

Peyton Watson could very well be this year's Herb Jones. He had a horrid year with UCLA, causing him to torpedo his draft stock. Still, Watson has all the tools that NBA teams are looking for.

At 6-foot-7 with a 7-foot wingspan, Watson is the prototypical NBA wing. As a high school prospect, he is profiled as a high-energy, uber-athletic future All-NBA Defensive team member. He was showing good instincts and habits at 17 years old.

Watson just couldn’t fit into UCLA’s bench this season as they prioritized giving their seniors more minutes. It’s hard to ignore but it’s also important to consider that he was there for just 33 games or four months. How much of a chance did he really get?

Currently, Watson is projected to go in the mid-20s to the early second round. Any team would be glad to have a high-upside prospect. He can probably already crack the rotation for some NBA teams, just off his defense alone.

He’d be great for the teams in the 27 to 29 range like Miami, Golden State, and Memphis. These playoff contenders have all the time to wait for him to develop but at the same time, he can realistically earn a 15-minute-a-game role for them just acting as a stopper off the bench.

Drafting with late picks, teams often weigh a player's readiness against their potential. Going high risk, high reward has paid off for a lot of teams but the low-risk get overlooked because of this.

Gonzaga point guard Andrew Nembhard is this type of prospect. As a four-year senior point guard, it was always going to be tough for Nembhard to generate any excitement on Draft boards.

But he could be a solid player immediately and for a long time. Nembhard could realistically play a backup role for most NBA teams. He’s a smart, pass-first floor general that creates shots for his teammates with his savvy ball-handling and quick reads. Mentally adjusting to the speed of the NBA shouldn’t be a problem for him.

But he doesn’t quite offer much as a scorer – a big requirement now for lead guards. He was a bad shooter in college that eventually transformed into an 80 percent shooter from the free throw line and 38 percent from deep in his final year at Gonzaga. Can he maintain this in the NBA? It’s going to be tough to see him evolve as a finisher at the rim with his 6-foot-3 frame and average athleticism.

Defensively, he doesn’t profile as a plus defender with his average wingspan and size. He’s smart enough to eventually be able to defend players of his size but it’s going to be a journey for him early in his career.

He’s drawn comparisons to Shabazz Napier and Malcolm Brogdon – his floor and ceiling in the NBA. He'll likely be one of the last players picked in the first round or one of the first in the second round. A team like Miami or Toronto could definitely use a backup point guard like Nembhard.

Did Steph Curry just have his best Finals showing yet? The greatest shooter of all time never seems to run out of tricks.