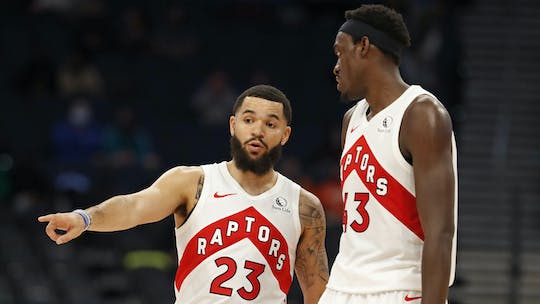 To say that the Toronto Raptors are having the worst year isn’t an exaggeration. Let’s lay down some facts:

It’s bad. So what business do they have in the League Pass rankings? Because a team in freefall with nothing to lose, fighting for survival, is an exciting watch. This is the perfect storm that can bring unexpected historic things like, say, a 53-point win.

Toronto still has about 20-plus games left, and they’re headed towards two possible exits: the lottery or the play-in tournament.

The tough road ahead for the no-homecourt, nothing-to-lose Raptors will be the biggest test of character for the former champs and a chance to shine for hot ticket Gary Trent Jr.

In a recent game against the Toronto Raptors, these were the starters for the OKC Thunder (put Google on standby): Svi Mykhailiuk, Theo Maledon, Isaiah Roby, Moses Brown, and Kenrich Williams.

Without Shai Gilgeous-Alexander and his rock Lu Dort, OKC gave all the minutes to the young guys, and the young guys delivered the W. All five of the starters finished in double digits, led by Svi’s 22 points.

Brown chipped in 20 points and 12 rebounds. If the name Moses Brown sounds familiar, it’s because he’s the guy from the clip that went viral a few years back of having his chin propped up by a supportive teammate after a botched play. If it doesn’t, it’s because he has missed a bunch of games and was sent to the G-League early this year. A few games after his NBA comeback, he dropped a 21-23 line against the Boston Celtics.

The Thunder have these amazing, interesting gems here and there, from the G-League success stories of Brown and Dort to the first-year highs of Maledon and Aleksej Pokusevski. You just don’t know what to expect from this Thunder team, who’s sort of like an obscure indie band with a couple of bangers not a lot has heard of.

OKC has secured a ton of first-round and second-round picks for the next six years, be sure to partake before they become cool.

The Portland Trail Blazers are making their debut in this weekly League Pass rankings, and it’s just about time. Not only is CJ McCollum back, he’s already in playoff form. Portland also has two more big contributors jumping in for one final regular season push before the real fun happens.

First, is Jusuf Nurkic. After missing two months of hoops because of an injured wrist, Nurkic has returned to Portland’s starting five to reclaim his inside presence. The Bosnian Beast is still shackled with a minutes restriction, but as the playoffs inch closer, expect the beast to be unleashed. Remember Bubble Nurk? That guy averaged 17.6 points, 4.0 assists, 1.4 steals, and 2.0 blocks (all career-highs), plus 10.3 rebounds in eight games in the bubble.

The second guy is Norman Powell, who was shipped from the Toronto Raptors in exchange for Gary Trent Jr. and Rodney Hood. In his first three games as a Blazer, Powell scored 22, 13, and 14—all wins. That should be the norm for Powell, a beloved Raptor who has instantly become a beloved Blazer.

If the CJ, Nurk, and Norm show isn’t enough reason for a League Pass viewing, there’s always the case for the Damian Lillard experience. The concept of Dame Time is usually invoked in specific milestones: the All-Star Game (where he is often snubbed), the playoffs, and the final two minutes of a close game. However, Dame Time in its full glory can happen just about anytime Lillard crosses halfcourt with the ball in his hand. Best not to miss any second of it.

The Blazers have the Los Angeles Clippers and the Utah Jazz on the docket this week, and these games should be good barometers for how the Blazers at full force truly measure up to the elite in the Western Conference.

The Minnesota Timberwolves are decidedly a bad team this year. Let’s just get that out of the way. They’re dead last in the standings with the worst win-loss record in the league. Their prized point guard D’Angelo Russell, instead of having ice in his veins, has been put on ice since February. Their prized franchise player Karl-Anthony Towns has missed 20 games.

Their prized rookie Anthony Edwards, on the other hand, is decidedly good. So good, that it spills over from the final buzzer to postgame interviews, where Edwards’ likability truly shines.

In 48 games, Edwards is averaging 17.3 points, 4.4 rebounds, and 2.5 assists. But that doesn’t at all reflect the gift that the Ant-Man keeps on giving in every game. His dunk package is nice, and he is already in the dunk committee’s office for dunker of the year. One of his submissions was his vulgar display of power against Yuta Watanabe of the Toronto Raptors. Another was his act of aggression against Robert Covington of the Portland Trail Blazers. The thing with his dunks is that it feels graceful at first, a takeoff so smooth it almost feels breezy. Then he sticks the landing and it’s brutal.

For those reasons, the Timberwolves are a League Pass must-watch.

Watching the Denver Nuggets post-trade deadline is a lot like riding a rollercoaster (if you can still remember how that experience felt like). It’s exhilarating, it’s dangerous, and it’s fun.

The addition of Aaron Gordon obviously has a lot to do with that, now that Nikola Jokic has found yet another offensive weapon he can activate with a no-look pass. And Gordon is not your typical offensive weapon, in that he may just be the perfect Jokic companion. He always seems to find the perfect spot to receive a Jokic assist—and he’s been in a Denver jersey for only three games.

In those three games, Denver won by 24 against the Atlanta Hawks, by nine against the East’s second top dog Philadelphia 76ers, and by seven against the West’s third ranking Los Angeles Clippers. All impressive wins. The highlights are exhilarating and the Nuggets looked dangerous.

The starting lineup of Gordon, Jokic, Michael Porter Jr., Will Barton, and Jamal Murray have only played 64 minutes together and were a plus-48 points versus opponents. This Nuggets five also had the best offensive rating and defensive rating in that three-game span. That sounds super fun and might be the closest thing we’ll ever get to physically riding a rollercoaster. Buckle up.