James has been upgraded to questionable for Saturday's contest on NBA TV. 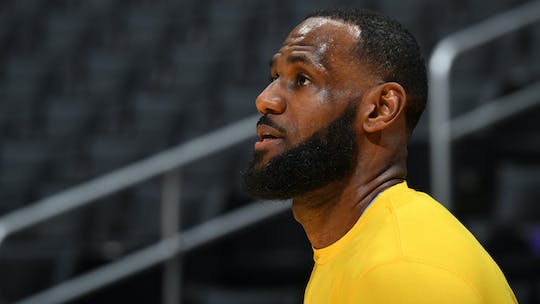 The Los Angeles Lakers could have superstar forward LeBron James back in the mix for the team’s game against the Sacramento Kings tonight (10:30 ET, NBA TV).

He has officially been upgraded to questionable. ESPN’s Adrian Wojnarowski reports that James plans to test the right ankle injury before the game.

The Lakers, at 36-26, are currently the No. 5 seed in the Western Conference and have 10 games left in their season (including Friday night’s game). They trail the No. 4-seeded Denver Nuggets by 5 1/2 games, but are up just one game on the No. 6-seeded Dallas Mavericks.

James’ return would be a definite boon for the Lakers, who recently saw fellow frontcourt star Anthony Davis return to the lineup on April 22 after he missed more than two months with right calf and heel issues.

James suffered his injury — a high right ankle sprain — on March 20 against the Atlanta Hawks and was ruled out indefinitely shortly thereafter.

James had missed just one game this season, when a left ankle sprain kept him out against the Kings in the final game before the All-Star break. He hasn’t missed significant time since a hamstring injury cost him 17 straight games midway through the 2018-19 season.

The Lakers have gone 8-12 during James’ absence.