LeBron James 'hopes' to make his return Friday for Lakers-Celtics

The Lakers are 4-6 overall this season without James, who has missed the last eight games with an abdominal injury. 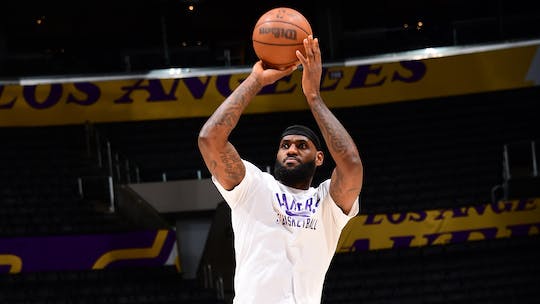 The Los Angeles Lakers fell to the defending-champion Milwaukee Bucks on Wednesday as they once again played without their superstar, LeBron James. James is working towards his return from an abdominal injury that has sidelined him for the last eight games.

Following the Lakers’ 109-102 loss in Milwaukee, James told ESPN’s Dave McMenamin he “hopes” to be ready Friday as L.A. visits Boston for their second matchup in a grueling five-game road trip.

The Lakers are 3-5 since James’ absence and 4-6 overall this season without him, but remain optimistic that he’ll be ready to go soon. Prior to Wednesday’s game, James took to the court with assistant coach Phil Handy for his pregame routine despite not playing in the game.

Per McMenamin, James has a “50-50” chance to play against the Lakers while coach Frank Vogel said James is considered “day to day” at this point.

The four-time MVP has played in just six games for the Lakers this season, averaging 24.8 points, 5.5 rebounds and 7.0 assists per game.

Los Angeles also is missing Trevor Ariza and Kendrick Nunn, who haven’t yet appeared in a game this season.

“It’s a part of the game,” said Anthony Davis, who scored 18 points for the Lakers against the Bucks. “Same thing with the team we just played. They’ve been hit with injuries as well. It kind of goes with the league, the business of the game. You go out there and put your body on the line every night, God forbid, something is going to happen in the course of a season. Someone’s going to get hurt. We’ve got to adjust and continue to fight until we get everybody back.”

While the Lakers await James’ return, they will continue to depend on the output of their other two superstars — Davis and guard Russell Westbrook — in hopes of bouncing back from Wednesday night’s loss.