Like it or not, the Suns are built for the playoffs

The Phoenix Suns have the necessary tools on both ends of the floor to succeed in the postseason. 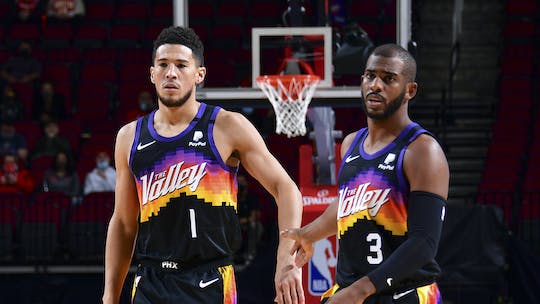 It's overtime and the Suns need a bucket.

Phoenix—ranked second in the league—were battling the best team in the league, by record, the Utah Jazz. Predictably, the entire game was tight with multiple runs from each team keeping the matchup close. It looked like the Suns had it in regulation after a Jae Crowder triple gave them a four-point lead with less than a minute to go. But Donovan Mitchell had other plans, converting an and-1 play then drilling a triple in the next possession to tie the game. Overtime. It felt like a playoff game.

Every Suns game has felt like a playoff game this season. So like in every successful playoff contender he's played on before, Paul told everyone to calm down. He waved his hand at his teammates. He gestured to head coach Monty Williams which play they were going with. When the possession went nowhere, Paul got the ball and iced the game with a 3.

All these – the close endings, the wins, the killer decision-making, the methodically languid games – come with having Chris Paul. The Phoenix Suns were pretty good last year; 8-0 in the bubble, one win away from ending their playoff drought. This year with Paul, they’re currently the second best team in the league, just one behind in the loss column for first. There are a lot of graphics showing how Paul has instantly increased a team's winning percentage in his first year with the teams he’s played on. While that's an astounding stat, it doesn’t fully show how well the Suns have assimilated Paul into their system.

When Chris Paul goes to a new team, that team gets better.


Much of this is simply because Paul is a better player than Ricky Rubio. The Suns still have the same diet of half-court and transition shots they had last year, but having a future Hall of Famer manage possessions has been a great boon. Most of the off-ball movement that Monty Williams installed last year are still present in the offense. This year with Paul, they've hunted more 3-point opportunities and midrange shots, the Chris Paul and Devin Booker specialty. The Suns are taking 34 percent of their shots from midrange and 38 percent from deep, both drastic upticks from last season.

The Suns' Rubio-led offense was usually initiated with a pick-and-roll then featured a lot of off-ball cutting and screening. The problem with Rubio was he wasn't much of a scorer outside of open 3-point shots and point-blank shots at the rim. With Paul, defenses always have to account for midrange pull-ups, of which Paul is hitting a blistering 52.9 percent. Just look at the shots he created down the stretch against the Jazz.

Paul's biggest impact is evident in how deadly the Suns have become in the fourth quarter. Last season, the Suns relied heavily on Booker isos to spell the difference in close games. The Suns this year can throw tried-and-tested Paul pick-and-roll at teams. Much has been said about 2018 first overall pick Deandre Ayton's lack of production this season, but his willingness to cede touches and focus on setting screens and grabbing rebounds has been key to Phoenix's success.

When basketball’s biggest talking heads debate about this year's biggest playoff contenders, the Los Angeles Lakers, Brooklyn Nets, Los Angeles Clippers, Utah Jazz, Milwaukee Bucks, and Philadelphia 76ers dominate the conversation. The Suns are always an afterthought, the team mentioned right at the end of the segment, seemingly to avoid riling up Suns fans. Much of this skepticism boils down to Phoenix's lack of playoff experience outside of Paul, whose playoff track record is a mixed bag of big performances and notorious blunders. Paul couldn't get talented teams like the Lob City Clippers and James Harden Houston Rockets over the hump, and analysts are rightfully skeptical about the Suns' composition compared to the rest of the field.

But Phoenix has shown they have tools that past Chris Paul teams didn't have. The Suns’ supporting cast outside of Booker, Ayton, and Paul is robust with the always-tough Crowder, freakishly-long Mikal Bridges, and sharp-shooting Cam Johnson all filling the 3-and-D-and-cut role very well for Phoenix's closing lineups. They've also benefited from rejuvenated efforts from Dario Saric and Cam Payne off the bench. Outside of the 2018 Rockets team that was one win away from the Western Conference Finals, this Suns team is the most malleable defensive team that Paul has had.

Most importantly, Booker is hungry for success. His first five seasons in the NBA were overshadowed with the Suns fluctuating between mediocre and plain horrible basketball. For the first time in his career, Booker is proving he can be a leader on a winning team, averaging 26.1 points on 49.5 percent shooting with 4.5 assists. He might not have the ball in his hands as much anymore, but his relishing all the open looks he's getting with Paul setting the table.

In the playoffs where fast breaks are scarce and possessions are limited, the Suns have a lineup that can thrive in half-court possessions on both ends. The repetitive nature of the postseason forces teams to simplify their motion offenses down to pick-and-rolls and isolations. When the playoffs come, the Suns will attack teams with Chris Paul pick-and-rolls and Devin Booker isolations, like they have all season.
Read Next
Features