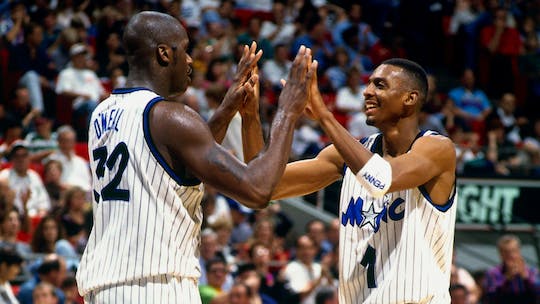 Today, the Orlando Magic are a team known more for spending time in the NBA Draft Lottery than in the NBA playoffs. Despite all their top picks, they still haven’t put it together.

Back in the mid-’90s, things were different down in Florida. In just six short years, the Magic went from expansion team all the way to the 1995 NBA Finals. All it took was two top picks to make that happen. The Magic two took the league by storm, becoming an instant contender in the East.

They also got to the top by playing a different style of basketball that was fun and exciting.

The state of the NBA

The NBA in the ‘90s belonged to Michael Jordan. But, there was a short window in the middle of the decade when His Airness was messing around with a baseball bat, leaving the race to the championship wide open.

During that two-year window, all teams needed to compete was a force in the paint to anchor the team’s attack. The New York Knicks and Houston Rockets faced off in the 1994 NBA Finals led by their big men, Patrick Ewing and Hakeem Olajuwon.

The other big men during that time were elite. Charles Barkley, Karl Malone, David Robinson, Shawn Kemp, and Alonzo Mourning, just to name a few. Joining that list was Orlando’s Shaquille O’Neal.

Drafted in 1992, O’Neal was the biggest reason why the Magic became contenders. He gave this young team a focal point on offense and a monster on defense. In 1995, O’Neal finished second in MVP voting after he averaged a league-high 29.3 points per game. He dominated both ends of the floor, finishing sixth in blocks per game (2.4 BPG) and third in rebounds per game (11.4 RPG).

You know who finished 10th in MVP voting that season? Penny Hardaway.

O’Neal might have been the cornerstone of the franchise but Hardway was just as important to the team’s rise. He was the playmaker that the Magic needed to unlock O’Neal’s full arsenal.

Penny’s pinpoint passing opened up a new dimension to O’Neal’s game. He wasn’t limited to playing in the post anymore. He was freed up, able to roam the court, roll to the hoop, and finish up high. Before Hardway, O’Neal was a steamroller in the post. With Hardaway, he was an unstoppable locomotive rumbling to the hoop.

Having these two as a one-two combo was enough for Orlando to make the playoffs. But with Jordan out of the picture, the team saw their opportunity to go all the way.

One of Jordan’s former teammates, Horace Grant, saw the Magic’s potential and joined them as a free agent in the offseason. Grant was the perfect power forward to pair up with Shaq and Penny. He could do the dirty work to help out O’Neal and had a nice outside touch that allowed him to step out of the paint for midrange jumpers.

Completing the core of the team were Nick Anderson, Dennis Scott, and Brian Shaw. These three played crucial roles around the Shaq-Penny combo.

Anderson and Scott were the team’s best shooters, both averaging above 41 percent per game. Additionally, Anderson was Orlando’s bulldog on defense. He was assigned to the toughest wing matchups.

Shaw was the Magic’s sixth man and backup point guard. He gave the team additional flexibility with their roster. He could step in and be the primary playmaker of the team, allowing Hardaway to slide into one of the wing spots. He could also play alongside Hardway as a shooting guard, spotting up from the midrange off the ball.

Before Stan Van Gundy surrounded Dwight Howard with Rashard Lewis, Hedo Turkoglu, Courtney Lee, and Jameer Nelson to form his popular four-out scheme in 2009, the ‘95 Magic kind of did it first.

The 1995 team capitalized on O’Neal’s gravity in the paint to open up shots for the rest of the team. While Grant’s range didn’t extend out to the 3-point range, he didn’t clog up the paint offensively, especially on O’Neal-Hardaway pick-and-rolls.

The shooters made a living that season on kick-out passes from O’Neal post-ups. The Magic averaged 6.4 3-pointers made that season. While that only represented 15 percent of their shots made, that number was higher than the league average of 5.5 3s made per game. The Magic also made 37 percent of their shots from the outside, above the league average of 35.9 percent.

The Magic led the league in scoring that season, scoring 110.9 points per game – a full nine points above the league average. They also did it efficiently, hitting 50.2 percent of their shots that season.

The Magic finished the regular season as the top team in the East with 57 wins. They were a confident team that took down tough opponents in the East playoffs, including the Chicago Bulls—even with Jordan making a comeback.

Unfortunately, their youth was exposed in the Finals when they went up against the defending champions.

It’s ironic that the Rockets used the same formula that the Magic used to win games. With Olajuwon holding down the paint, the rest of the team fired away from beyond the arc. They led the league in 3-pointers made, hitting 7.9 per game at a 36.8 percent clip.

Beyond their outside shooting, it was Olajuwon’s dominance on both ends that won them the championship that season. He finished the series averaging a whopping 32.8 points, 11.5 rebounds, and 2.0 blocks per game. He outclassed the younger O’Neal during the four-game sweep.

Little did the team know that their championship window closed after that series.

The Magic came back in 1996 to win 60 games, which is still the best record in franchise history. Most assumed that they would make it back to the NBA Finals with the core intact. Unfortunately, Jordan exacted revenge on them.

After that, O’Neal left Florida and moved to sunny Los Angeles. Hardway tried to carry the team on his own but he just couldn’t do it alone. His knees took a beating and he was never the same player after the 1996 season.

The mid-’90s Magic were such a promising team. While they never won a championship together, they remain an iconic team because of how innovative they were. They did a lot of new things few teams were doing during that time. They were the cool new kids that everybody wanted to follow.